3,2,1… Frankie Go Boom – We kick this week’s list of releases with writer/director Jordan Roberts’ second feature.  Frankie (Charlie Hunnam) has a problem, and that problem is his brother (Chris O’Dowd), a recovering addict who loves to film Frankie’s every embarrassing and personal moment, including, Frankie and a girl (Lizzie Caplan) having sex. Now Frankie has to track the video down and keep it out of the hands of a notorious pornography producer (Chris Noth) who happens to be the girl’s father. This is one of those movies where nothing is easy.  You can’t even go and hire an old prison cellmate without some dramatic twist. Limited theatrical release on Friday, but it’s already been available via VOD from Variance Film.

Argo – On November 4, 1979, the Iranian Revolution reached a boiling point, and the U.S. Embassy was taken over. Six Americans managed to slip out the back and hide at the Canadian Ambassador’s house. The CIA brought in their specialist to devise a plan to get the six Americans out. That plan was Argo, a fake Canadian movie production that was going to shoot in Tehran, and as they packed up and left, they would take the six Americans with them. This is a movie about how movies can save lives, no wonder the critics love it.  Ben Affleck directs and leads a very impressive cast: Alan Arkin, John Goodman, Bryan Cranston, and Kyle Chandler.  A clear contender for one of the best films of the year. Out wide this week from Warner Brothers.

Atlas Shrugged: Part II – How exciting, the sequel to the unmitigated flop that was Part I! Ayn Rand’s monolithic novel, Atlas Shrugged, has motivated college students to think that they understand philosophy and economics since it was first published in 1957. Recently, it has become a holy text for The Tea Party and many GOPers. Apparently these people don’t mind a 72 page monologue. Over wrought with characters saying exactly what they think and feel and leaving any trace of subtext at the door, let us dig back into another low-budget attempt at Rand’s manifesto.  Anthem was only a hundred pages and carried virtually the same message, why didn’t they go for that adaptation? Limited release from Atlas Distributing Company.

Gayby – Jenn (Jenn Harris) is tired of waiting around for Mr. Right and she is willing to settle for Mr. Right-Now, as long as it gets her pregnant. It just so happens that Mr. Right-Now also happens to be her best friend, Matt (Matthew Wilkas) who himself wants a child. Perfect! She wants to conceive the old-fashioned way, hot dog!  Matt is gay, ohhh…. Jenn does get pregnant, but it might be by that smoldering one night stand and not Matt. Boy it’s tough to be a New Yorker. Added bonus for any fans of Girls, keep an eye out for the stock New York indie actors. A small film from writer/director Jonathan Lisecki and a limited release on Friday from Wolfe Releasing.

Here Comes the Boom – MMA has come on pretty strong in recent years, and this marks the second mainstream film to bring the sport into the public eye. Very strange that both movies (Warrior being the previous and superior film) involve a school teacher as a fighter. Are we worried that our teachers are push-overs? Maybe not, but if a teacher can become a formidable opponent in a matter of weeks simply by training during their free time, then it kind of turns the professional fighters who have grueling training regiments, strict diets, and a fearless temperament into the push-overs. Kevin James plays the lovable teacher turned MMA fighter. This Boom opens wide on Friday from Columbia Pictures and has nothing to do with Frankie Go Boom.  There is an awful lot of booming going on this week. 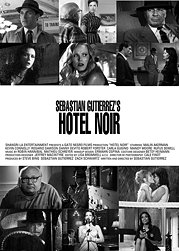 Hotel Noir – Los Angeles, 1958. Say that out loud, and you are already in a noir film.  A detective (Rufus Sewell) holes up in a hotel and waits for the killers to come and get him. Why? What did he do? In film noir, the whys never matters. We all did something bad at some point, and whatever punishment is coming is probably deserved. Starring Carla Gugino, Danny DeVito, Malin Ackerman, Robert Forester, on and on.  Sebastian Gutierrez gathered a bunch of his friends and shot this one on the cheap and released via video on demand.  You can even watch the first ten minutes on their Facebook page here.

Seven Psychopaths – As follows: Colin Farrell, Sam Rockwell, Woody Harrelson, Christopher Walken, Tom Waits, Abbie Cornish, and Olga Kurylenko. Colin Farrell plays a blocked screenwriter who hooks-up with Sam Rockwell for inspiration. Rockwell and Christopher Walken are con-men who specialize in kidnapping pooches. They kidnapped the Shih Tzu of crime boss Woody Harrelson and things go south in a hurry. Thankfully, no one is right in the head.  It’s crazy versus crazy in Martin McDonagh’s second film and this one looks full of quirks and quips that he is known for. Whoever could have thought that such a little Shih Tzu could ever cause so much trouble? Limited release on Friday from CBS Films and you can read my review here. 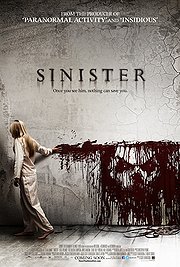 Sinister – Oh good, another found footage film. I was wondering how many days I would have to wait until another one came out. At least this one incorporates it into the narrative, which means much less shaky cam. Ethan Hawke plays a father and husband who is also a true crime novelist. Hoping to find a new spark of inspiration, he buys a house where a family was brutally murdered, and moves his family in without telling them. In the attic he finds a bunch of home movies that have a Pagan version of the devil contained within. Now that he has seen him, he has unleashed evil on the world. All right then. Opens wide on Friday from Summit Entertainment.

Smashed – No one said it would be easy putting down the bottle, but sometimes you have to. Mary Elizabeth Winsted and Aaron Paul give tour de force performances as a couple very much in love, and very much in love with booze. One day, the girl realizes that she has taken it too far and wants to give it up.  No easy feat, especially since they had so much in common: cocktails, cabernets, Cornonas… He’s there for her, but not ready to admit that it’s time to give up drinking as well. Supporting performances from Nick Offerman and Octavia Spencer. Script by Susan Burke and director, James Ponsoldt. Limited release from Sony Pictures Classic, but well worth your time. You can read my review of the film here.