California Solo – Lachlan (Robert Carlyle) is an aging, washed-up Britpop star living on a farm outside of Los Angeles. He likes his work, where he lives, his podcast about flame-out rock stars, and a girl he has his eye on. One night he gets a DUI and things get worse from there. An old drug charge is brought back up, and Lachlan is faced with the threat of deportation. To stay in America, he will have to convince his wife that he divorced and the child he barely sees that it is important to both of them that he stays in the states. Written and directed by Marshall Lewy and in limited release this Friday from Strand Releasing. Seems like a fine movie, but lacks that little oomph to get people into the theaters.

The Collection – Well, here we go again. From the writers that brought you most of the Saw films, comes another one that involves, labyrinths, serial killers, impossibly good-looking people in terrifying situations, and every conceivable terror that might show up on a psych exam. A group of kids go to a rave that traps them, transports them to a special location, and really bad things happen to them. But there was one, there always is, who escaped and now he needs to go back and save the victims. Written by Marcus Dunstan and Patrick Melton with Dunstan stepping behind the camera as well. This is one of those movies where you know how it ends, even if you haven’t seen it.

Dragon – It’s Film Noir meets Martial Arts, what more could you ask for? A couple of ruthless assassins come to a town to collect their dues. A completely unassuming man (Donny Yen) dispatches them and he falls under the investigation of a hard-boiled detective (Takeshi Kaneshiro) who believes that the man is more than he claims he is. If that wasn’t bad enough, China’s underworld come to town to meet the mystery man and see how good he really is. If you like martial art films, then this one will not only be up your ally, it will also be a nice new spin on the genre. Directed by Peter Chan and out in limited release this Friday from The Weinstein Company.

Ex-Girlfriends – Written, directed, and starring Alexander Poe comes a tale of young New Yorkers and their problems. Disheartened by romance and dating, Graham tries to rekindle a friendship with an ex-girlfriend of his. Not the best idea in the world, but that’s how we get drama, bad ideas. The ex, played by Jennifer Carpenter, is trying to get back with a guy that is actually dating another one of Graham’s ex-girlfriends. And people wonder how they get STDs. A little slice of life, if this is your life. If not, then well, it’s not. Just be glad that there are plenty of other films out there. Out in New York City this Tuesday, and on VOD and iTunes from Film Buff.

Hecho En Mexico – Documentary directed by Duncan Bridgeman about the diverse culture and terrain of Mexico. Mexico is a large and old nation composed of many different types of peoples and cultures, much more than the assumed drug cartel that this documentary is trying to look past. If you don’t know anything about Mexico or what it has to offer the world, then this is a pretty good primer. If you are looking for something deeper about the country and culture, then this might not add much. This is more along the 90 minute, glossy, travel ad variety. Opens in Los Angeles on Friday from Pantelion Films.

Killing Them Softly –Pushed back a couple of times, the new mob movie starring Brad Pitt final comes out. A couple of low life criminals knock over the wrong card game, now they have to be taught a lesson. Enter Jackie (Brad Pitt) a hired gun to take care of business. This is a mob movie in the vein of Mean Streets where it’s not about the family, or the Don, or the top dogs, it’s about the foot soldiers, the low lives, the wannabes, and the bottom of the food chain. Looks like a fun time. Supporting performances from Richard Jenkins, James Gandolfini, Ray Liotta, Scoot McNairy, and Ben Mendelsohn. Directed by Andrew Dominick and in wide released from The Weinstein Company this Friday.

King Kelly – Sort of an interesting concept for a movie, even if the idea seems a little half-baked. Kelly (Louisa Krause) is the kind of girl who wants to be famous the easiest way possible, naturally she uses her sexuality. She is an aspiring web cam girl who is on a fast track to pornography and she documents and let’s others document every single second of her life. Exploiting herself and others, while allowing herself and her image to be exploited, which might have something to say about our current obsession with social media, fame, and capturing every single moment, or it might just be an egotistical mess. Directed by Andrew Neel, who also co-wrote the screenplay with Mike Roberts. Limited release from See Think Films this Friday. 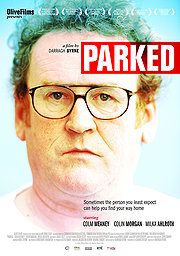 Parked – Halfway through life’s journey, Fred finds himself isolated from society, broke, homeless, and without any future ahead of him. He lives in his car and seems to be winding out his days, until he meets Cathal, another car squatter. Cathal is twenty-one, a fun-loving, dope smoking, optimist. Just what Fred needs in his life. The two help each other through the days, and little by little, Fred comes back around. Starring Colm Meaney as Fred and Colin Morgan as Cathal, with Darragh Byrne directing his first feature. This Irish film will see a limited release in theaters this Friday from Olive Films.

Silent Night – I think this might actually count as the first Christmas movie of the year. Remaking the horror classic Silent Night, Deadly Night from 1984, director Stephen C. Miller brings the story of a psychopath dressed as Santa Claus back to a contemporary year. The premise is simple, Santa goes from town to town, brutally murdering all the naughty children, and then disappears with out a trace until next holiday season. We’ve all heard that one, right? Malcolm McDowell and Ellen Wong head the B-movie cast and Anchor Bay is releasing it in limited theaters this Friday, but will hit DVD shelves on December 4th.