Beautiful Creatures – Lena (Alice Englert) is the new girl in town, and she brings a lot of baggage to town. Ethan (Alden Ehrenreich) wants to get out of this small and shabby town, falls for Lena, and hopes that she can get them both out of dodge. That would all be well and good, but Lena is a witch and has a ticking clock tattooed on her hand. She might be a good witch, or she might turn dark. If that wasn’t enough, she now has to deal with Ethan and all these emotions raging inside of her. Being a teenager is too damn tough! The two of them uncover the dark past of their families, their history, and their town. Jeremy Irons, Emma Thompson, and Thomas Mann (actor not author) fill out the world, Kami Garcia wrote the script, and Richard LaGravenese sat in the director’s chair. From Warner Brothers. 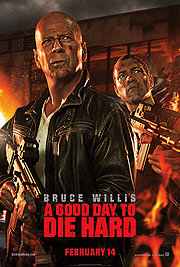 A Good Day to Die Hard – I could not come up with a worse title if I tried. It’s as if the working title on the screenplay some how snuck it’s way into the finished product and no one caught it. Well, Bruce Willis is back and he’s in Russia, and some men just have a knack for finding trouble. John McClane goes back to his ass-kicking ways, but he didn’t expect was that he was going to run into his son, Jack (Jai Courtney) who needs a little help taking down the bad guys. Father and Son team up and everything plays out the way you might expect. This is the fifth installment of the Die Hard franchise, and this time the script is by Skip Woods, Roderick Thorp with John Moore as director. From 20th Century Fox. 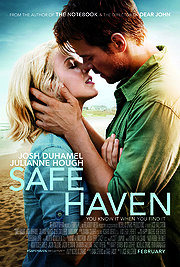 Safe Haven – Kate (Julianne Hough) arrives at a small seaside North Carolina town and catches the eye Alex (Josh Duhamel), the dreamy looking store-owner, who is a father to two precocious kids. Of course he’s even more desirable because he is a widower, and that’s just too much for poor little Kate’s heart. They develop a relationship, but Kate’s past catches up with her and drives everyone bonkers. This one seems a little odd, as it is playing on two different bizarre fantasies, the Male: If only my wife was dead, I could bang a hot twenty-something and there wouldn’t be a messy divorce and all that screaming. Female: If only I could find a guy who could show me that he is the perfect father, but without him being married, because I don’t want a pissed off Mother/Wife coming at me. Cobie Smulders co-stars and Lasse Hallström directs a script from Leslie Bonhem and Dana Stevens, based on the novel by Nicholas Sparks, which is why everyone will see it. From Relativity Media.