André Gregory: Before and After Dinner – Most people know André Gregory from My Dinner With Andre, a filmed conversation on life with his close friend and collaborator Wallace Shawn. Others know of his extensive work in the theater, some may know of his brief stint in Hollywood. But only one person knows the whole story, and it’s not Gregory, it’s his wife, director Cindy Kleine. This is a look back in the life of one man, who became a bit of a cultural icon. Never one to shy away, Gregory offers plenty to his fans, but for those who haven’t yet be indoctrinated, you might want to step out and see My Dinner with Andre instead. Out in limited release this Wednesday from Cinema Guild.

Bert Stern: Original Madman – Bert Stern was a filmmaker, photographer, ad man, and his passion for beauty, life, and women is perfectly reflected in his work. Who else could have photographed a woman in red-framed sunglasses, suggestively sucking on a lollipop for Lolita? Only the work of a man who saw that image every time he saw a woman, could have managed such an iconic work of art. This documentary from Shannah Laumeister gives a warts-and-all approach to Bert Stern, his work and his marriage, and his legacy. The photos of Marilyn Monroe are an extra bonus. Out in limited release from First Run Features and out on DVD next Friday.

The Brass Teapot – What if the phrase, “No pain, no gain” was literal? John and Alice: young, in love, married, the American dream at their feet. A series of strange events places them in possession of a Magic Tea Pot that produces cold hard cash when the owner suffers physical pain. The pot has no interest in your sweat or tears, it’s the blood that it’s interested in. Money never solves problems it only compounds them. Juno Temple and Michael Angarano are the young couple with Alexis Bledel, Bobby Moynihan, Alia Shawkat, and Billy Magnussen. Script by Tim Macy with direction from Ramaa Mosley. Out in limited release from Magnolia Pictures. My review here. 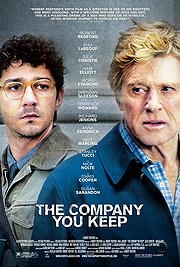 The Company You Keep – This might be one of the most star-studded casts I have ever seen. Leading the charge is the star and director, Robert Redford, and following him are Shia LaBeouf, Julie Christie, Susan Sarandon, Nick Nolte, Chris Cooper, Terrence Howard, Stanley Tucci, Richard Jenkins, Brendan Gleeson, Brit Marling, and Sam Elliott. If that isn’t enough reason to go out and see this, then the short is about a man  on the run to clear his name. He was once apart of the Weather Underground in the 1960s and has been living incognito since. Written by Lem Dobbs, which continues to add to the movie’s pedigree. Out in limited release from Sony Pictures Classics. 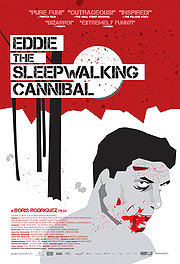 Eddie The Sleepwalking Cannibal – Inspiration sure can come from the strangest of places. Lars (Thure Lindhardt) comes to a small town for rest and relaxation. Eddie (Dylan Smith) is a lovable mute who has lost his parents in a very grisly set of circumstances. Lars develops a relationship with Eddie, but when Eddie turns out to be a sleepwalker murder, Lars discovers his muse. Can he control Eddie from going too far, or will he have to release him upon an unsuspecting world just to paint his masterpiece? Co-starring Stephen McHattie and Georgina Reilly, story by Jonathan Rannells and Alex Epstein with script and direction from Boris Rodriguez. Out in limited release from Music Box Films. 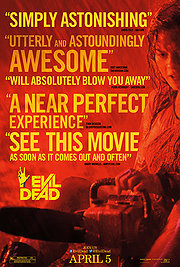 Evil Dead – The bottom line is, if someone tells you, “Don’t read from this book.” Don’t read from the book. If someone says, “Don’t go up into the attic.” Don’t go up into the attic. Ever hear of curiosity killed the cat? I’ve seen enough horror movies to know how to not ruffle feathers, and one of them is, don’t go on vacation to some cabin in the woods. That’s just bad news. That’s where demons live, and if you summon them from The Book of the Dead, they will come and kill everyone. With Jane Levy, Shiloh Fernandez, Jessica Lucas, and Elizabeth Blackmore. Written by Fede Alvarez and Rodo Sayagues with Alvarez direction. Out in wide release from TriStar Pictures.

Jurassic Park: An IMAX 3D Experience – Twenty years seem like a long time ago. Movies have changed so much, special effects have changed so much, Spielberg has changed so much, but few things can compare to the awe that accompanied watching the Brachiosaurus emerging from the water. The dread that flooded over when Lexi noticed that the goat was gone from the T-Rex paddock. The sheer terror when those Raptors figured out how to open a door. Few things are as wonderful as this movie, and a re-release with a snazzy IMAX and 3D update is just the excuse needed to revisit this masterpiece. Out in wide release from Universal Pictures.

Simon Killer – My mother gave me some very simple advice, about visiting Paris, make sure you take along someone you love, because the city will crush you if you don’t. Never very good at adhering to my mother’s advice, I visited solo, and learned how right she was. That is not the city for the desperate and the lonely. Maybe Simon (Brady Corbet) should have taken my Mother’s advice, or maybe he likes the dark and twisted world of French Sex Parlors and blackmail. Who am I to say? Mati Diop plays the prostitute that drags poor Simon into the underworld, or is it the other way around? Written and directed by Antonio Campos and out in limited release from IFC Films.

Trance – Movies can be very misleading. They pull the rug out from under you: it was just a dream, we believed an unreliable narrator, what we have seen is a lie. Part of our fear is that we aren’t just watching a dream, we are a participant of the dream. What if someone was using hypnotism to control us? What if you were accused of a crime you can’t remember committing? How can we be sure that things we remember are events we experienced? Come take a trip down the rabbit hole with James McAvoy, Vincent Cassel, Rosario Dawson, and Michael Fassbender. Written and directed by Danny Boyle and out in limited release from 20th Century Fox.

Upstream Color – From the writer, director, and star of Primer comes an equal bizarre and confusing story about things that are, that might be, and that might never exist. A man (Shane Carruth) and a woman (Amy Seimetz) are a part of a very intricate and fascinating scam that eventually draws them together. They are also connected to each other in ways that either one of them could possibly predict, and how that unfolds is shocking and confusing. Part experimental film, part puzzle box, completely Shane Carruth. This movie relies heavily on a sound design that will benefit from a theater, so you might as well keep an eye open for this one. Out in limited release from Independent Pictures. My review.