Arthur Newman – Wallace (Colin Firth) is tired of his life and decides to start over again. This time with someone else’s identity, completely fabricated, a new man: Arthur Newman (a bit on the nose if you ask me). He meets Michaela, or Mike, (Emily Blunt) and they take off together, having all sorts of adventures and romps that poor old Wallace could only dream of. But when fiction becomes so desirable, there is a point where we must turn it into a fact. That means taking the crap along with the fun. Two characters in search of an identity, two great actors in search of a better movie. Written by Becky Johnston and directed by Dante Ariola. Out in limited release from Cinedigm.

At Any Price – Writer/director Ramin Bahrani returns with a look at a typical heartland family life torn apart in a very typical heartland kind of way. Henry Whipple (Dennis Quaid) owns a very successful farming company, but he conducts his business in a less than savory way. Henry wants his son to settle down and help out with the family business, but Dean (Zac Efron) wants to be a racecar driver instead. Things turn sour when Henry’s business is subject to an invasive investigation. Kim Dickens, Heather Graham, and Clancy Brown provide the supporting role, and Sony Pictures Classics distributes this one in limited release starting Wednesday. 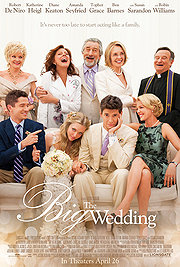 The Big Wedding – Husbands and wives, sons and daughters, mistresses and lovers, all gathered here under one
roof to bear witness to this sham of a mockery of a sham of two mockeries of Holy Matrimony. The devout Catholic mother comes from Columbia to see her son get married, and not one of these people can behave themselves for forty-eight hours. Is it really that hard to keep it together? Can you really make a subpar movie with this impressive of a cast? Written and directed by Justin Zackham, starring Robert DeNiro, Susan Sarandon, Diane Keaton, Amanda Seyfried, Robin Williams, Topher Grace, and Katherine Heigl. Out in wide release from Lionsgate.

Kon Tiki – Norwegian movie that was singled out as one of the five foreign Oscar nominees, explores one of its nations greatest moments. Back in 1947, Thor Heyerdahl (Pål Sverre Hagen) crossed the Pacific Ocean with five other men on a basal wood raft to prove that Persians could have done it in Pre-Columbian days to settle Polynesia. The trip was a historic 101 days, and the movie explores the events of the journey and Heyerdahl’s obsession with proving himself right. Written by Petter Skavlan and direction from Joachim Rønning and Espen Sandberg. Out in limited release from The Weinstein Company.

Mud – Writer/director Jeff Nichols’ third film might be his most compelling yet, and he is anything but an easy filmmaker. Two boys (Tye Sheridan & Jacob Loftland) come across a motorboat stuck up in a tree on an island in Mississippi. Living in the boat is a man named Mud (Matthew McConaughey). He spins the boys a tale of a man on the run for murder, being tracked down by a bunch of bounty hunters, and a pretty girl in trouble. When the pretty girl and bounty hunters suddenly show up in town, maybe fiction is really fact. Supporting performances from Reese Withspoon, Michael Shannon, and Sam Shepard. Out in limited release from Roadside Attractions.

The Numbers Station – Katherine (Malin Akerman) has an unusual job, every day she broadcasts out a series of numbers, coded instructions, that change the fate of many unseen lives. Emerson (John Cusack) is a former Black Ops agent that has a new assignment, guarding Katherine. When the broadcast compound is taken over by heavily armed terrorists, Katherine and Emerson must do what it takes to stay alive. Once they figure out the plan behind the attack, it’s up to them to save the world. It wouldn’t be a movie if they didn’t. F. Scott Frazier writes and Kasper Barfoed directs. Out in limited release from Image Entertainment this Friday, and DVD May 28th.

An Oversimplification of Her Beauty – From Executive Producers Jay-Z, Wyatt Cenac, and Dream Hampton comes a very experimental film about love, loss, and love again. Terence (Terence Nance) is very much in love with the girl (Namik Minter), but is the love romantic or platonic? What if he wants romantic love and she only wants platonic love? What if she isn’t quite sure if she wants platonic, maybe romantic love? Can Terence sway her? Or will his attempts be
what pushes her back? A diverse and heartbreaking analysis of a singular moment in the human experience. From writer/director Terence Nance, out in limited release from Variance Films.

Pain & Gain – Michael Bay makes a comedy? Michael Bay makes a comedy that might actually be intentional comedy? Michael Bay makes a movie I might want to see? Color me shocked. Daniel (Mark Wahlberg) and Paul (Dwayne Johnson) are two gym rats that want a little something more in this life. They are not very good at doing things the conventional way, so it looks like they are going to have to rob someone, a really prick who takes and takes. Just a couple of Robin Hoods in tank tops. Anthony Mackie, Tony Shalhoub, Rebel Wilson, Ken Jeong, and Rob Corddry support, Christopher Markus and Stephen McFeely write and Bay directs. Out in wide release from Paramount Pictures.

Paradise: Love – This is the first installment of trilogy that will deal with women’s takes on sex, the Church, and eating disorders. First up, love and sex. Teresa (Margarethe Tiesel) is a fifty-year-old Austrian woman on a vacation in Kenya where she hopes to be a “sex tourist” hopping from one black boy to the next. Of course, what she really wants is love, but what she keeps looking for is sex. In Kenya, sex is just as much as business as it is anywhere else. Written by the husband and wife team of Ulrich Seidl and Veronika Franz and directed by Seidl. Out in limited release from Strand releasing, with two more installments (Paradise: Faith & Paradise: Hope) to follow.

The Reluctant Fundamentalist – Changez (Riz Ahmed) came to America in search of fortune and the ability to not just succeed, but the ability to win. He does for a while, he’s smart, social, and sophisticated, he is living out his American Dream. Then the world around him abruptly changes when the World Trade Center comes down. Changez is from Pakistan, is Muslim, and for that, he is punished. Supporting performances from Kate Hudson, Kiefer Sutherland, and Liv Schreiber. Written by William Wheeler and directed by Mira Nair, who is a good director in search of a good movie. Out in limited release from IFC Films.