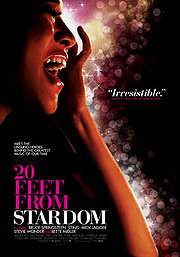 20 Feet From Stardom – There isn’t that much distance from the band at the front of the stage, and the singers in the back. Only a twenty foot walk, but, as The Boss puts it, “It’s a bit of a walk.” This documentary follows Merry Clayton, Darlene Love, Claudia Lennear, Lisa Fischer, and Judith Hill, all back-up singers, all trying to break into careers with some sort of success, some sort of identification, something that isn’t so difficult, so heartbreaking, so discouraging. Not having your dreams come true is difficult, but is the difficulty easier or harder when you just barely miss it? When it’s so close you can taste it? Director Morgan Neville gathers the singers and the talent and explores a world most people don’t think of when they listen to music. Out in limited release from Radius-TWC.

Berberian Sound Studio – Gilderoy (Toby Jones) is a British sound designer in high demand. He accepts a job working on an Italian picture, which turns out to be a gruesome horror movie. Gilderoy is not used to doing horror, but this is what he has been hired to do, and do it, he will. The movie digs deep into his soul and forces him to confront his past, and not in a good way. When was the last time that someone’s past came back, and it didn’t haunt them? Fatma Mohamed, Antonio Mancino, Cosimo Fusco, Eugenia Caruso, and Tonia Sotiropoulou co-star and Peter Strickland write and directs. Out in limited release from IFC Films.

Between Us – Two really bad evenings, spread out over a couple of years, is what comes between us. Grace (Julia Stiles) and Carlo (Taye Diggs) are newly married and travel to visit their friends in the Midwest, Sharyl (Melissa George) and Joel (David Harbour). The evening gets way out of hand, and nobody is proud of what they say. Years pass, and Sharyl and Joel show up at Grace and Carlo’s apartment in New York City, and it all unravels yet again. Nobody has problems like wealthy people have problems. Script by Dan Mirvish and Joe Hortua with Mirvish directing. Out in limited release from Monterey Media with a DVD release next month. 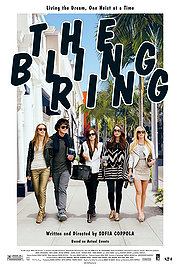 The Bling Ring – Three teens, Nicki (Emma Watson), Sam (Taissa Farmiga), and Marc (Israel Broussard) idolize the famous, but not just the famous, the famous and the glamorous. On a lark, they decided to break into Paris Hilton’s mansion and steal some of her stuff. Not to sell, not to be mean, not to do anything more than to inhabit the same space as Paris does. To breath her air, and pretend that they could be just like her. Based on actual events from just a few years ago, writer/director Sofia Coppola explores the bottomless depths of these narcissistic youths. Out in limited release from A24.

Call Me Kuchu – Imagine being the first openly gay person in an entire nation. Talk about standing up for yourself. David Kato is the first openly gay man in Uganda and he has a few compatriots, but not many. Uganda is not a country friendly to homosexuals and is trying to pass a law that forbids homosexuality and makes it a crime to be a homosexual. It’s one thing for people to sneer, point, and mock, it’s completely different when who you are is a crime against the state. Kato is no longer with us, but there are others who heed the call and fight for equality even in the face of oppression. Directed by Katherine Fairfax Wright and Malika Zouhali-Worrall, Call Me Kuchu (a Ugandian synonym for homosexual) is in limited release from Cinedigm.

Far Out Isn’t Far Enough: The Tomi Ungerer Story – Tomi Ungerer has written children’s books with child-like innocence and wit. He has done political propaganda and anti-war demonstrations. He has done a lot of very bizarre erotica. Artists are like that, they don’t want to be reigned in by any one thing. Of course, all of this can come with a very big cost, and while Ungerer was once a beloved and best-selling child book artist, he offended too many and has spent the last years of his career in professional exile. Documentary by Brad Bernstein recaps Ungerer’s life, complete with interviews from his fans and colleagues. Out in limited release from First Run Features.

In The Fog – War transforms a man into something that cannot be easily reconciled. In 1942, the Germans occupied the western border of the USSR and there they captured an innocent man with a group of saboteurs. They decide to hang the saboteurs, but leave the innocent man alive. This immediately condemns the man, as the rumors of his treason and explanation for his survival bury him deeper than a grave would. Vladimir Svirskiy plays the innocent man and Sergei Loznitsa writes and directs this exploration of the human condition in one of the direst of times. Out in limited release from Strand Releasing.

Man of Steel – Time for another trip down memory lane. Kal-El was born on the alien planet of Krypton, and his father Jor-El, sent Kal to Earth to escape destruction. On Krypton, the Red Sun makes Kal-El just like any other person, but the Yellow Sun of Earth makes him into a superman. Raised by Ma & Pa Kent, Clark must grapple with who he is and what he must do with his abilities. As if being a God-like alien isn’t tough enough, the evil General Zod shows up and it really hits the fan. Henry Cavil plays the Man of Steel, Russell Crowe and Kevin Costner play the fathers, Amy Adams is the reporter looking for a good scoop, and Michael Shannon brings the crazy. Zack Snyder directs a script by David S. Goyer. Everywhere from Warner Brothers.

Pussy Riot: A Punk Prayer – Not in theaters, but out on HBO is a new documentary about the Russian performance group, Pussy Riot, which most people became aware of a few months ago when three of the members, Nadia, Masha and Katia, were put on trail in Russia. In America, these artists would receive protection via the First Amendment, but in Russia, not so much. To make matters even worse, they are women and that only compounded their fates. Putin has been quoted saying, “they got what they deserved” for decaying the moral value of a nation, but artists far and wide have stood with Pussy Riot in solidarity. Directed by Mike Lerner and Maxim Pozdorovkin and available via HBO and HBO Go.

This is The End – Is there anyone less equipped to handle the end of the world than a celebrity? Most of them have three or four people to handle their day to day activities, they rarely have food in their homes, they are great at doing what they are told to do and not so great of figuring out what to do, and most of them are Jewish. So when the Christian Rapture comes, they are left behind and have to fend for themselves. Seth Rogan, James Franco, Craig Robinson, Danny McBride, Jonah Hill, Jay Baruchel all play versions of themselves, and a few other celebrities stop by for some choice moments. Written and directed by Evan Goldberg and Seth Rogen and out in wide release from Sony Pictures.