Ain’t Them Bodies Saints – Bob Muldoon (Casey Affleck) is trying to get back to the love of his life, Ruth (Rooney Mara). While he’s been away in prison, Sheriff Patrick Wheeler (Ben Foster) has been keeping an eye on Ruth, and now that Muldoon is out, Wheeler has to go looking for him. Ruth has plans of her own, and when people stand between you and your beloved, they don’t amount to a hill of beans. Sometimes it doesn’t matter which side of the law you are on, what matters are your intentions. Cue the shootout. Written and directed by David Lowery and out in limited release from IFC Films.

Austenland – A life in books can be so alluring. It can also be a deadly obsession that consumes every waking moment of your life and stands between you and normal people. Meet Jane (Keri Russell), she loves Jane Austen novels. I mean loves them. When normal life and normal people just don’t cut it anymore, she saves up her pennies and heads off to Austenland, a resort that offers an immersive experience of Jane Austen’s time and place. Sadly, Jane isn’t as well off as the other guests, and has to live in the servant’s quarters. That’s fine, because Austen’s heroines were always full of pluck and tenacity and all Jane has to do is follow their lead. Co-starring Jane Seymour, Georgia King, J.J. Feild, and Bret McKenzie. Written by Jerusha Hess and Shannon Hale, with Hess directing. Sony Pictures Classics releases this into limited theaters. 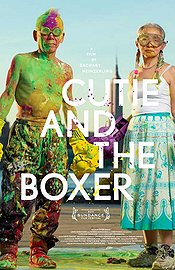 Cutie and the Boxer – Ushio Shinohara was on the rise as a ‘70s New York artist. He never quite garnered the fame he was due, and now he’s 80 and looking for a comeback. Not even a comeback, a desperate last-ditch effort to sell some art and validate his life and work. His wife and assistant (although she resists that title) Noriko wants to help Ushio get his exhibit together, but she is also trying to carve out her own identity as a painter of Cutie illustrations. A loving documentary about an artistic couple who have navigated the rocky waters and come out the other side. One thing is for sure, and that Cutie loves Bullie. Directed by Zachary Heinzerling and out in limited release from RADiUS-TWC.

Jobs – Steve Jobs, one of the men who invented Apple Computers, and who would go on to revolutionize the music industry with iTunes and the phone with iPhone, is easily one of the most well-known icons of the recent years. Will this movie starring Ashton Kutcher as the great innovator plunge deep below the surface and explore the man and the Rosebud that drove his obsession? Will it illuminate the key players that helped Jobs? What will it add for dramatic effect? Josh Gad, Matthew Modine, Dermot Mulroney, Lukas Haas, and J.K. Simmons co-star. Matt Whiteley wrote the script, Joshua Michael Stern directed it, and Open Road Films puts it in wide release.

Kick-Ass 2 – In 2010, Dave (Aaron Johnson) decided to put on a costume and fight crime as Kick-Ass. In the process, he met Mindy (Chloë Grace Moretz) and the two of them fought a band of criminals, and it ended up costing them quite a bit. From the outside, it seemed like fighting crime as a masked avenger was actually a pretty bad idea. I guess I missed the point, because not only are they back, but they are ready for war, and the legions have strengthened on both sides. Red Mist (Christopher Mintz-Plasse) has renamed himself The Motherfucker and bought himself an army designed to bring down Kick-Ass. Jim Carrey shows up as Colonel Stars and Stripes along with a whole slew of wannabe superheroes and supervillians. Jeff Wadlow directs and Universal Pictures gives this a nice wide release.

Lee Daniels’ The Butler – Burdened with a sadly cumbersome title, and a subject matter that seems ripe for the Hallmark Channel, this movie’s sum is greater than it’s parts. It is the story of Cecil Gains (Forest Whitaker), a White House butler who served eight presidents over three decades. “A room should feel empty when you are in it,” the advice given to the butler who was anything but invisible. Gaines buttled while the country was thrown into chaos during the civil rights movements, he buttled when we went to Vietnam, he buttled in times of war and times of peace. Gaines showed that it was possible to overcome obstacles by respecting and acknowledging them. Not everyone can be a rebel and a revolutionary. Co-starring Oprah Winfrey, Cuba Gooding Jr., Terrence Howard, and a slew of character actors a mile long. Written by Danny Strong and directed by Lee Daniels. Out in wide release from The Weinstein Company.

Paranoia – Online privacy is a myth. All you information can be accessed in a matter of minutes, and all your most private and crucial information can be used against you. There is only one-way to fight it, be boring as hell. Too bad that we have a couple of impossibly good-looking up-and-comers (Liam Hemsworth and Amber Heard) and a couple of extremely rich white guys (Harrison Ford and Gary Oldman).  It’s no wonder they can’t keep things private. Hemsworth is the pawn that Oldman plays against Ford and Ford plays against Oldman, and the high stakes battle of corporate giants is waged in back alleys and over fine linen. Just another day at the office, right? Jason Dean Hall and Joseph Finder wrote the script, Robert Luketic directed it, and Relativity Media gave it a nice wide release. Better delete those cookies.

The Patience Stone – Once upon a time, during the insurrection of a Middle Eastern country… It does not matter which country the story takes place, all that matters are the players. A wife has been married for ten years. In those ten years, she has remained silent. All of her pain, her sorrow, her disappointments, and her sacrifices have gone on without a voice to accompany them. Then, the husband is hit by an attack and is turned into a vegetable. While the wife keeps watch over her comatose husband, she opens up. She spills out her whole life for him, and he responds with equal silence. Atiq Rahimi, with co-writer Jean-Claude Carriere, adapts his novel. Performances by Golshifteh Farahani, Hamidrez Javdan, Hassina Burgan, Massi Browat, Hamid Djavadan, and Massi Mrowat. Out in limited release from Sony Pictures Classics.

This is Martin Bonner – Martin Bonner (Paul Eenhoorn) is in his fifties and needs a restart button. He relocates to Reno and starts work as a mentor to released prisoners, lending them a hand with their rehabilitation. One prisoner, Travis (Richmond Arquette) has just been released from a 12-year sentence and needs some help restarting his life, and Martin is just the guy to help him. Surprisingly, Travis is also there to help Martin out, who has taken to speed dating and refereeing soccer on the weekends. The sophomore effort from writer/director Chad Hartigan is an exploration of the human condition and what it takes to rebuild after a crisis. In limited release from Monterey Media.

You Will Be My Son – Paul (Niels Arestrup) runs a very successful, very prestigious wine estate. His son, Martin (Lorant Deutsch) is educated and book savvy when it comes to wine, but Paul is old school and doesn’t have faith in his son’s abilities. He does have his eye on Philip (Nicolas Bridet), the son of a dying winemaker, who has exactly what Paul is looking for. Looks like Father and Son are going to come to some pretty heavy blows over this one. Written by Gilles Legrand, Delphine de Vigan, and Laure Gasparotto with Legrand directing and out in limited release from Cohen Media Group.