13 Sins – Do we make the choices that we make because we were born that way, or because a series of events brought us to this point? Well, when you have someone down on their luck and up to their eyeballs in debt, you can pretty much count on them acting in desperation. That is what Elliot (Mark Webber) is going to prove. He is a down-and-out salesman when a mysterious phone call comes and offers him a way out. He takes it. Even if that means doing some pretty horrific stuff to everyone else. Ron Pearlman is the detective trying to catch him and Tom Bower is the voice on the phone egging him on. Written by David Birke and Daniel Stamm with Stamm directing as well. In limited release and on VOD from RADiUS-TWC. 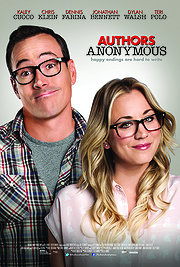 Authors Anonymous – Writing groups allow struggling writers to come together, commiserate about failures, frustrations and insecurities. Occasionally, they are an excellent place to reveal in successes. It works just fine, as long as the failures are terrific and the successes are minor. It also helps if you don’t fall for the one pretty girl in the group. Hannah (Kaley Cuoco) just inked a deal on her first book and that has drawn the ire of the rest of the group (Teri Polo, Dylan Walsh, Dennis Farina, Jonathan Bennett) and put a time limit on Chris Klein’s chances of getting with her.  David Congalton wrote the script, Ellie Kanner directed it and Screen Media Ventures distributes it on VOD and in limited theaters.

Bears – April 22nd is just around the corner and that means it is time to continue Disney’s Earth Day tradition of nature documentaries. This year’s subject: bears. Skye is a mother Grizzly Bear living in Alaska and the cameras follow her as she tries to raise and protect her family. If you’ve never seen a Disney Nature Documentary, then do yourself the favor of taking in its beauty and wonder. There is an added bonus, if you see it opening week Disney will donate some of the money to the National Parks Foundation. Directed by Keith Scholey and Alastair Fothergill with narration from John C. Reilly. In wide release from Walt Disney Pictures.

Fading Gigolo – Fioravante (John Turturro) never thought it would come to this. His dear friend Murray (Woody Allen) is in a financial bind and comes up with a ridiculous way to make some money: offering Fioravante’s services to a woman (Sharon Stone). Fioravante is far from a gigolo and Murray is about a far from a pimp as you can get, but what is there to lose? Fioravante goes for it and finds that he has quite the talent. Soon, other women are looking for a little slap-and-tickle, Murray is looking to get his beak wet and Fioravante is looking for meaning. Sofía Vergara, Liev Schreiber, Vanessa Paradis and Bob Balaban co-star in a script written and directed by Turturro. In limited release from Millennium Entertainment.

The Final Member – It all started when his teacher gave him a bull penis. Sigurður “Siggi” Hjartarson has been collecting and curating penises for over forty years. His collection includes everything from a field mouse’s penis to a portion of a Sperm Whale’s penis (only the part that is left exposed after the whale dies), but there is one penis that is missing, the penis of a human being. I’m not sure if I want Siggi to complete his collection, but I am fascinated by his commitment. Phalluses are everywhere in cinema, but they’ve never been on-screen quite like this. Jonah Bekhor and Zach Math direct and Cinedigm & the Alamo Drafthouse gives this a limited release. 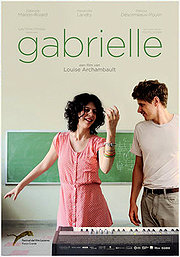 Gabrielle – Gabrielle (Gabrielle Marion-Rivard) is a developmentally challenged adult living in a home with others in a similar situation. She likes it there, as does her family–who don’t have to worry as long as she has some supervision–but that doesn’t mean that Gabrielle wants to stay there forever. Gabrielle wants to find love and find her independence. She starts an adult relationship with another one of the residents, and no one seems to be able to handle this. Mélissa Désormeaux-Poulin, Alexandre Landry, Benoit Gouin, Isabelle Vincent and Vincent Guillaume Otis co-star in this movie written and directed by Louise Archambault. In limited release from Entertainment One.

A Haunted House 2 – If you saw A Haunted House last year and thought, “That could have been worse,” you’re in luck! The sequel is here to hopefully bury the bar so low that there couldn’t possibly be a third. Malcolm (Marlon Wayans) continues to be haunted by demons, spirits, ghost, terrible racial humor and even a move to another neighborhood isn’t going to stop the madness. Jaime Pressly, Essence Atkins, Dave Sheridan, Affion Crockett, Gabriel Iglesias and Ashley Rickards were all in need of a payday. I sure hope the checks cleared. Michael Tiddes directed the collections of words and punctuation that Wayans and Rick Alaverz rounded up and called a script. In wide release from Open Road Films. 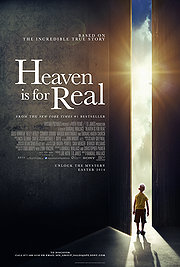 Heaven is For Real – Easter is this Sunday, which makes the timing for a movie about the afterlife just perfect. Colton (Connor Corum) is a young child who has suffered a near-death experience. He survives and comes back a healthy child with a profound sense of things that he couldn’t possibly know. He claims to have visited Heaven and he brings back the messages from the dead. This puts an incredible burden on the small community that suddenly has an awful lot of attention placed on it. Greg Kinnear, Kelly Reilly, Margo Martindale and Thomas Haden Church all co-star in this faith-based movie from director Randall Wallace. In wide release from Sony Pictures.

Manakamana – The Sensory Ethnography Lab (SEL) operates out of Harvard University and promotes the innovation of aesthetics and ethnography. In the past, the SEL was behind the immersive documentaries Sweetgrass and Leviathan and now their latest endeavor finds freedom and truth within the confines of a Cable Car in Nepal. Shot on 16mm and using a series of unbroken shots the length of a film magazine, directors Stephanie Spray and Pacho Velez test the boundaries of cinema and catalog each one of these passenger as they ride high in the sky. In limited release from Cinema Guild.

Transcendence – Dr. Will Caster (Johnny Depp) has been working with a crack team of scientist to develop a form of Artificial Intelligence that will far surpass the intelligence of every human being combined. There is a resistance force that does not seem to think that this is a fantastic idea and they decide to assassinate the good doctor. They fail to outright kill him, but Dr. Caster is placed in a coma with only a few days left to live. His partner and lover, Evelyn (Rebecca Hall), decides to save him by uploading his consciousness into the very A.I. program that he developed and Dr. Caster lives on. Hall 9000 has nothing on this and Dr. Caster has quite the field day with his newfound powers. Co-starring Paul Bettany, Morgan Freeman, Kate Mara and Cilian Murphy. Written by Jack Paglen and directed by Wally Pfister, who made his name as the cinematographer of The Dark Knight Trilogy and Inception. In wide release from Warner Brothers.