Age of Uprising: The Legend of Michael Kohlhass – Michael Kohlhass (Mads Mikkelsen) was just another family man, a horse trader and a loyal citizen. Then they stole his horses and murdered his wife, now he has nothing to live for. Nothing, except for his revenge. A classic tale of retribution painted across the wide-open landscape of 16th Century France. Mélusine Mayance, Delphine Chuillot, David Kross, Bruno Ganz and Denis Lavant co-star in a script written by Christelle Berthevas and Arnaud des Pallières with des Pallières directing as well. In limited release from Music Box Films.

Filth – Bruce Robertson (James McAvoy) is one Bad Lieutenant. He’s into drugs, sex, crime and general mayhem. He doesn’t just have one problem, he has a whole plethora of them. Lennox (Jamie Bell) is his cohort, Dr. Rossi (Jim Broadbent) fixes him up best he can and Toal (John Sessions) is the man who is trying to bring down the hammer. Somewhere between Seijun Sezuki and Hunter S. Thompson is the weird and wild world of Filth. Co-starring Eddie Marsan, Imogen Poots, Shirley Henderson and Joanne Froggatt, with Jon S. Baird directing and adapting the novel from Irvine Welsh (of Trainspotting fame). In limited release from Magnet Releasing.

The Grand Seduction – Tickle Head is an incredibly small harbor town. Doctor Paul Lewis (Taylor Kitsch) is stopping there for one month so that he can treat the sick and give some general medical advice. Murray (Brendan Gleeson) has other plans, seduce the good doctor into staying so that the factory decides Tickle Head is a good place to set-up shop and voilà, jobs! People have tried crazier things and gone further. Co-starring Gordon Pinsent, Mark Critch, Liane Balaban and Anna Hopkins co-star, Ken Scott and Michael Dowse write and Don McKellar directs. Out in limited release from Entertainment One.

The Hornet’s Nest – The Afghanistan War has become American’s longest, and it continues to wage day after day. Two award-winning journalists, who are also father and son, Mike and Carlos Boettcher embed themselves in a company that has to see the bloodiest battlegrounds this war has known. It was supposed to be a one-day operative, but it turned into nine. The Boettchers happened to be right place, right time and the audience gets to reap the benefits. Directed by David Salzberg and Christian Tureaud direct. Out in limited release from Freestyle Releasing.

Koregnal – The Koregnal Valley is deep within the borders of Afghanistan, and there, the war wages on endlessly. These soldiers take fire every single day that they occupy and defend the base. Some get a rush of adrenaline from the combat, others ask if they are serving some greater good or some greater evil. This is what war really feels like. Sebastian Junger fearlessly documents their lives and Kaleidoscope gives this a limited theatrical run.

Lucky Them – Ellie (Toni Collette) is in trouble. She has only one more chance to write a story for the magazine, or she’s going to be spending some time at the unemployment line. It’s just that the story her editor (Oliver Platt) assigned her to, was to find long-lost rock God, Matthew Smith. Seems easy enough, except that Smith broke Ellie’s heart a decade ago and she never got over it. Picking up an amateur documentarian (Thomas Haden Church) isn’t going to improve the situation any, nor is hooking-up with another musician (Ryan Eggold). Poor, poor Ellie. Emily Wachtel and Huck Botko write, Megan Griffiths directs and IFC Films gives this one a limited release.

Maleficent – You thought you knew the story, it came to you once upon a dream, but that was only the beginning. Walt Disney Pictures looks for nostalgia and re-brands Sleeping Beauty but with the perspective from the villain. Maleficent (Angelina Jolie) was really just a misunderstood fairy who was out to take over the kingdom. Okay, maybe she wasn’t that misunderstood, but you get my drift. Capitalizing on the success of Wicked and hoping that everyone will go and buy Sleeping Beauty, Maleficent stars Sharlto Copley, Elle Fanning, Sam Riley, Imelda Staunton and Miranda Richardson. Written by Linda Woolverton and directed by Robert Stromberg. Everywhere from Disney. 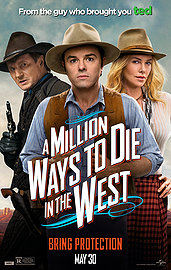 A Million Ways to Die in the West – Arizona, 1882, a rough and tumble nick of the woods. You could die from gunslingers, snakebites, syphilis, giant blocks of ice, you name it. The title says it all. Auteur Seth MacFarlane writes (with co-writer Alec Sulkin), directs and stars in this big-budget comedy set very lovingly in the western genre. Charlize Theron, Amanda Seyfried, Liam Neeson, Giovanni Ribisi and Neil Patrick Harris are MacFarlane’s partners in crime and Universal Pictures gives this a nice wide release. 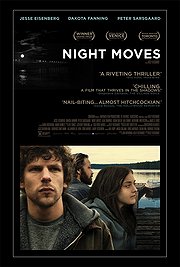 Night Moves – Three environmentalists have decided to take their game to the next level, they are going to blow-up a hydro-electric dam. A classic tale of “ends justifying the means” is explored by one of America’s greatest working directors, Kelly Reichardt who also wrote the script with Jonathan Raymond. Jesse Eisenberg, Dakota Fanning and Peter Sarsgaard are the three who come together to blow up the dam, and Cinedigm is the company that is giving this movie a limited release.

We Are the Best! – Klara (Mira Grosin) and Bobo (Mira Barkhammar) are rebels without a cause or clue. They are thirteen and decide to form a punk band, never mind the fact that they can’t play their instruments to save their life. The Germs didn’t let that stand in their way either, that’s what punk rock is all about. They recruit Hedvig (Liv LeMoyne), who actually has musical talent, and take their act and attitude on the road. Writer/director Lukas Moodysson adapts his wife Coco’s graphic novel for this tale of growing up in Sweden. Out in limited release from Magnolia Pictures.