A Birder’s Guide To Everything is a realistic coming-of-age movie where the conflicts presented are small, the triumphs are equally small, but the questions asked are as big as they are significant.

By the time the movie starts, David (Kodi Smith-Mcphee) has already lost his mother. He deals with it the way most teenagers deal with anything and pulls back and spends most of his time sulking. The only time he actually seems to be enjoying life is when he is birding, a hobby that his mother instilled in him. On his way to school, he spots an unusual looking duck and figures it to be a Labrador Mallard, a species thought to be extinct, but there is a chance that it might be a Lazarus Species. The metaphor at work here is an obvious one, but it works. Being a teenager doesn’t often revolve around subtlety. Obvious is the way to go.

Obvious is exactly where this movie finds strength. The characters speak exactly what they are feeling, whether it is Timmy (Alex Wolff) constant obsession with sex—what fifteen year old boy isn’t? —or Peter’s (Michael Chen) desire to be more outgoing than he actually is. All three actors are under twenty and close to the ages they portray on-screen, which might explain why they deliver their dialog so convincingly. Their lines catch slightly in their throat, not quite sure if they should say it, or if they even believe what they are saying. Even when they are surrounded by one another, there still exists a slight air of awkwardness.

A Birder’s Guide to Everything contains plenty of protagonists, but lacks a true antagonist (each time one appears, they are quickly subverted) and that might hold some viewers at arm’s length. I do not know what writers Rob Meyer and Luke Matheny (Meyer also directed) were aiming for, but they created something that lands precisely in the middle. A nice piece of work that reminds the viewers what it is like to be a teenager. Nothing more and nothing less. 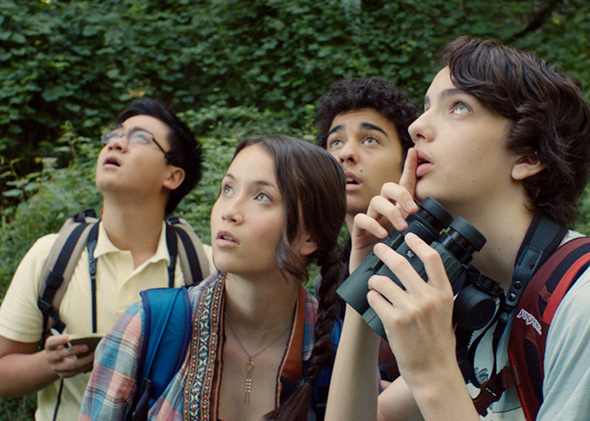 One thought on “A BIRDER’S GUIDE TO EVERYTHING”