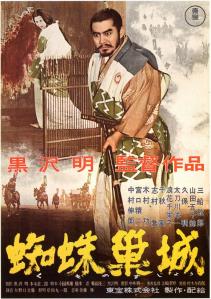 The movie opens and closes with a similar image, the ruins of a fortress, built at the foot of Mt. Fuji, enveloped by fog. A visual cue from famed Japanese director, Akria Kurosawa reminding viewers that what goes around, comes around, and that the only thing that truly lasts, are the elements.

Throne of Blood, playing at the Landmark Chez Artiste on Wednesday, April 29, is Kurosawa’s interpretation of Shakespeare’s Macbeth. Three times, Kurosawa looked to the Bard for inspiration — Hamlet became The Bad Sleep Well (1960) and King Lear lent itself to Ran (1985) — but it is Throne of Blood that takes Shakespeare’s play and re-purposes into something far more bleak than anything Shakespeare could have imagined.

Kurosawa, working again with longtime screenwriters Hideo Oguni, Shinobu Hashimoto and Ryûzô Kikushima, retain the basic structure of Shakespeare’s play, but trims Shakespeare’s five acts into four and give each character clear motivation for their actions. Yes, there is a witch, a prophecy, murder, madness and a spot that won’t come out, but in Kurosawa’s hands, these players play out a much more tragic fate. That fate, represented slyly by circles incorporated throughout the movie, is something that is inescapable, and in essence, elemental.

Although Shakespeare’s play takes place at the tail end of the 16th Century, Kurosawa moves the story back to the 15th Century, to the Sengoku Period of Japan, a period marked by constant military conflict. Washizu (Toshirô Mifune) is a war-hardened general returning from battle with his cohort, Miki (Minoru Chiaki) when the two stumble upon a spirit of the woods who speaks the prophecy that Washizu and Miki will be promoted to masters of North Castle and Fort One respectively. When they return to Spider Web Castle, Lord Tsuzuki (Takamaru Sasaki) appoints them accordingly and Washizu knows that the fix is in.

If that wasn’t enough, Washizu’s wife, the dastardly Lady Asaji (Isuzu Yamada), convinces Washizu to take up arms and kill Tsuzuki. Whether of not Washizu succumbs to Lady Asaji’s wishes because he is a henpecked husband, or because he dances the steps mapped out for him is unclear. What is clear is that Kurosawa and Mifune revel in watching poor Washizu twist and squirm in his predicament, one that plays out beautifully and visually until the fog rolls in and claims Spider Web’s Castle for good.

Even though Kurosawa borrowed heavily from Macbeth, Throne of Blood isn’t a direct adaptation. What give the movie its signature style and haunting imagery is due to the austere elements of Japanese Noh theatre, elements that make the already pessimistic story profoundly bleaker.

Noh, a style that has remained unchanged for the past 600 years, is one of sparse sets and limited movements. In traditional Noh theatre, actors wear masks to cover their faces, using specific lighting instead to cast emotions. For Throne of Blood, Kurosawa commanded both Mifune and Yamada to turn their faces into Noh masks, and in the case of Lady Asaji, the results are haunting.

There are few directors in the annals of cinema who are as uncomplicated, interesting and easy to understand as Akira Kurosawa. His movies are dynamic, the perfect synthesis of movement, expression, emotion and humanity. Regardless of their running time, there is nothing of excess in a Kurosawa picture; everything in the frame serves a purpose. Throne of Blood, above all of his masterpieces, exemplifies that. No line, no expression, no movement and no cut is superfluous. All the elements serve a dramatic purpose.

Akira Kurosawa made Throne of Blood in 1957, smack-dab in the middle of an incredible run that started in 1950 with Rashômon and lasted until 1965’s Red Beard, and it is essential viewing for anyone interested in the cinematic arts, and a treat to see once again on the big screen.