Watching movies is an enjoyable experience, thinking about movies is illuminating, writing about movies can be agonizing, and attempting to interpret movies is down right futile. Room 237 is an analysis of Stanley Kubrick’s horror masterpiece, The Shining (1980) divided into nine parts, each section focusing on a certain subject. Six unseen theorists delve into minute moments and hidden symbols that might explain the larger themes of the movie. They are all right, and they are all wrong, and reading about people’s take on Room 237 is just as fascinating as watching Room 237. The proverbial snake is eating it’s own tail.

END_OF_DOCUMENT_TOKEN_TO_BE_REPLACED 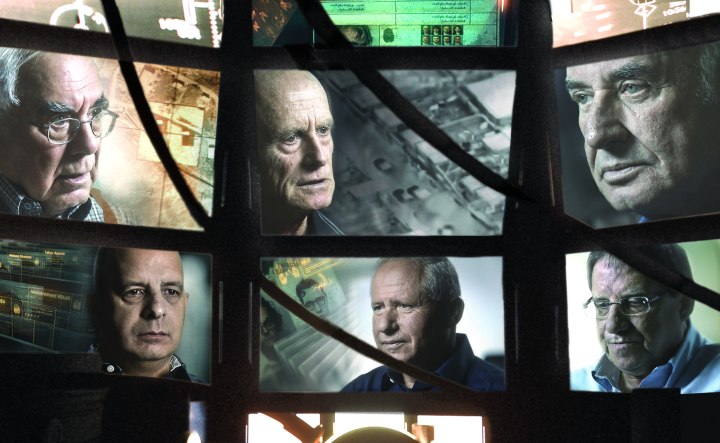 The Shin Bet (Israeli Security Agency) is in charge of protecting the State of Israel from terrorists both foreign and domestic. Their primary target, and the primary enemy of Israel is the Arab nation. The strife between Israel and the Arabs has been one of the most volatile and ongoing conflicts since The Six Day War in 1967. The Gatekeepers is a documentary length interview with the six surviving leaders of the Shin Bet: Avraham Shalom (1981-1986), Yaakov Peri (1988-1994), Carmi Gillon (1994-1996), Ami Ayalon, (1996-2000), Avi Dichter (2000-2005), and Yuval Diskin (2005-2011), who was still head of the Shin Bet during production. The documentary consists of talking heads, some archival footage, and computer animation to recreate the events discussed. The animation blends seamlessly into archival photography, and gives the viewer a sense of place. You don’t need to know a single thing about Israel, Palestine, Hamas, Judaism, and Islam to understand what they are talking about. Everything is clear and concise.

END_OF_DOCUMENT_TOKEN_TO_BE_REPLACED

Behind the Hollywood Hills, tucked away in the San Fernando Valley, hidden on a side street in Van Nuys was the recording studio, Sound City. It was open for business in 1969 and would go on to be a recording studio for some of the greatest albums of the 20th Century. However, time has not been kind to the recording business and Sound City, and as Josh Homme of Queens of the Stone Age said, “There are no more book stores, no more music stores, and no more Sound City.” Sound City is more than a documentary about a recording studio, it is Dave Grohl’s love letter to music and it’s legacy.

END_OF_DOCUMENT_TOKEN_TO_BE_REPLACED

In 1964 a group of seven-year old children were interviewed for the documentary “Seven Up.” They’ve been filmed every seven years since. NOW THEY ARE 56.

The Up Series by Michael Apted is one of the most fascinating documents of the human existence. It was started in 1964 by Granada Television as a showcase of fourteen children from different socio and economic backgrounds of Britain. Michael Apted was a researcher on the program (called Seven Up!) and selected the children with the help of Gordon McDougall. The director of Seven Up! was Paul Almond and the opening of the program gives us an idea of the goal, “Why do we bring these children together? Because we want to get a glimpse of England in the year 2000. The union leader and the business executive of the year 2000 are now seven years old.” That idea is actually based on the Jesuit teachings of Francis Xavier, “Give me a child until he is seven and I will give you the man.” Seven years after Seven Up! Michael Apted followed up with the participants in Seven Plus Seven (1971) and has ever seven years since. Not all fourteen kids have participated in every single installment, Charles bowed out after 21 Up (1977) and hasn’t participated since. Peter claimed that he was done with the project after 28 Up (1984), but thankfully he came back for 56 Up. John missed 28 Up & 42 Up (1998), and Symon skipped 35 Up (1991), and with the exception of Charles, everyone showed up for 56 Up. This is probably due to maturity. The importance and relevance of the program has revealed itself, and now they embrace it closer than they ever could before.

END_OF_DOCUMENT_TOKEN_TO_BE_REPLACED

Obsessed individuals, few things are as entertaining to watch. Their motivation, their endurance, their insanity can be quite hilarious while simultaneously awe-inspiring. Jeff Orlowski’s latest documentary, Chasing Ice, follows nature photographer James Balog and his team as they trek up glaciers all in the name of environmentalism. Or maybe it’s in the name of photography. Regardless why they do it, they do manage to get some killer footage while trying to do some good. Chasing Ice doesn’t waste any time hitting us over the head with a bunch of statistics trying to convince us of global warming. The documentary accepts that global … END_OF_DOCUMENT_TOKEN_TO_BE_REPLACED