If there was any one thing that I learned from Roger Ebert, it was that movies are not what they’re about, they are how they’re about what they’re about. Gravity is a movie about moving past tragedy. The how of it is accomplished by placing the subject in space, isolating her completely. If that wasn’t enough of a motivating factor, she is running out of oxygen and the Earth’s gravity is slowly pulling her toward inevitability. Like most disaster movies, conquering or avoiding one obstacle, one moment of disaster, only leads to another, often worse scenario. “Out of the frying pan and into the fire” just doesn’t seem to cut it for this one. Gravity is more like, “out of the frying pan and into the atomic bomb.” If you think this is bad, just wait three minutes, it’ll get much worse.

The tragic figure in this drama is Dr. Ryan Stone (Sandra Bullock). Stone lost her daughter in a freak occurrence a year or so back, and since she has buried herself in work and spends her nights endlessly driving around while listening to the radio. She has no interest in moving beyond the tragedy, choosing instead to shoulder the burden and carrying the pain with her. This is how she found herself in space. One second developing a medical system to look into the human body, the next second floating above the Earth, installing a similar program on to the Hubble Telescope. Her partner in the space walk is veteran astronaut, Matt Kowalski (George Clooney), who couldn’t be any more different than Stone. Drawing on Clooney’s Aww-Shucks Charisma, Kowalski drifts in space trying to break the longest spacewalk record, telling tales, and listening to country-western music. He is a typical head in the clouds type who can’t stop admiring the view. He reminds me of Binx Bolling, the protagonist in Walker Percy’s The Moviegoer, “Not for five minutes will I be distracted from the wonder”. Stone on the other hand, can’t see the beauty right in front of her, she has closed off her heart and mind to any wonder left in the world.

This is all we learn about either lead. Tragedy strikes before we even meet any of the crew of the Space Shuttle Endeavor. On the other side of the planet, the Russians have detonated one of their own satellites, triggering a chain reaction of space debris destroying other satellites and spreading more space debris. In a spectacular set piece composed of total chaos, musical score, and an unbroken camera take that shifts perspective from third person limited to first person point of view, Stone and Kowalski are now totally alone. To find a return pod to make it home, they have to make it to either the International Space Station or the Chinese Space Station, and both are tiny specks off in the distance. Communications are dark, they are running out of oxygen, and the debris that destroyed their shuttle are still orbiting the Earth and will make another appearance in another ninety minutes. Things are not looking good. 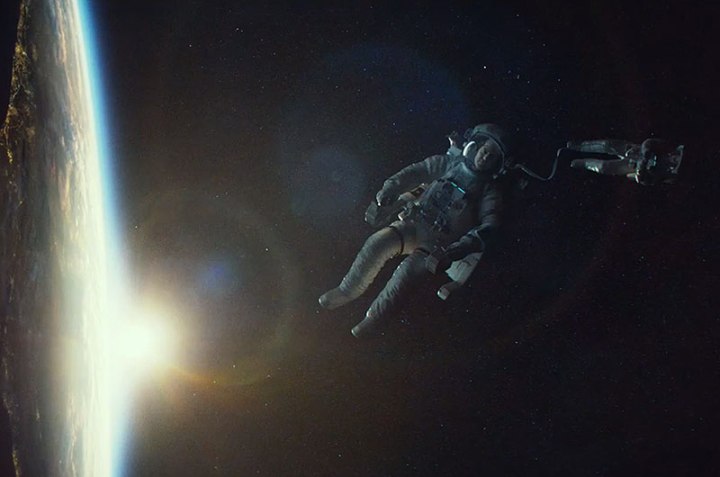 There are two very oblique, often harsh, phrases told to a person coping with tragedy: “Someday this pain will be of use to you” and “God works in mysterious ways”. I have heard both uttered to the grieving, and neither time have they been taken well. Maybe because they are not designed to comfort, but to illuminate. Too bad illumination like this does not come quickly, a much larger canvas is needed to understand the correlation of events. These two phrases will help the individual to understand, to move beyond the tragic, and ultimately, to come to grace. I believe that Cuarón and his screenwriting son had this objective in mind while they were working on the script for Gravity. That “someday” for Stone is to-day, and she will have to dig deep to survive this. First she lost her daughter, then she lost her ride home, now she has lost Kowalski, but she continues to carry on. She doesn’t give up and say, “Oh woe is me,” she continues to struggle and survive, regardless of the struggle ahead.

Of course, she cannot, nor will she do it alone. Stone is protected by a spiritual triumvirate. Aboard the International Space Station, Stone comes in contact with the first, a picture of an Orthodox Christ. Stone laments that she does not know how to pray and asks for help. The help she seeks is provided in the form of a guardian angel that spurs her back into action. Stone smiles, she knows that her angel was sent to her via her daughter. Stone makes it to the Chinese Station and boards the escape pod. Above the console sits a small statue of the Buddha, smiling. This is the pod that will guide Stone back to Earth and to a life made new again. The Christ holds his hand out, blessing Stone. The guardian angel brings hope and motivation. The Buddha smiles favorably upon Stone. With such heavyweights in her corner, there is no doubt that she will make it.

Faith is what guides ones from tragedy, and it is faith that guides Stone back to Earth. She is born again, right from the water, crawling her way back to shore. She even struggles to stand again, just like the first creatures to emerge from water and walk on the land. Stone has been made new again, a beautiful new human being with one hell of a story to tell. A visual expression of the line Robert Bresson chose to end Pickpocket with, “What a strange way I had to take to meet you.” I often think about what the characters of a movie do after the credits roll and the lights come up. Rarely have I felt such confidence in a character as they exit a movie. Dr. Stone is going to make it, she is going to be all right. Godspeed, Dr. Stone.

Gravity isn’t just a gorgeous and impressive technical achievement (it most certainly is), it is also Cuarón’s belief in the power of the human being and the spirit to survive. You can see that in his previous effort Children of Men, but it is on spectacular IMAX 3D display here. Gravity is gorgeous to look at, and one of the few movies to actually utilize 3D to enhance the experience of watching a movie, but it is far from a hollow technical achievement. Gravity is greater than the sum of its pixels, it beats with as much heart as the best works of art about the resilience of the human spirit. Much like Stanley Kubrick in 2001: A Space Odyssey and Andrei Tarkovsky in Solaris, Cuarón enters the emptiness of space to explore the most remarkable of all things. The human spirit. 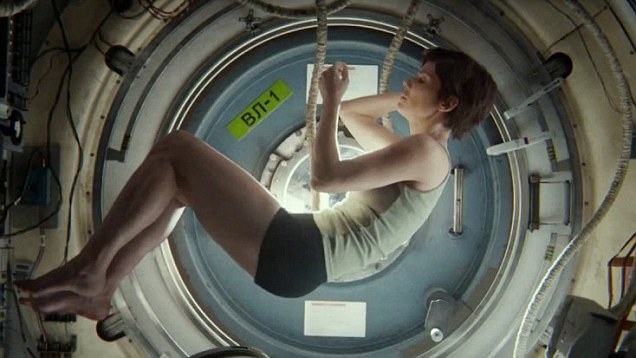