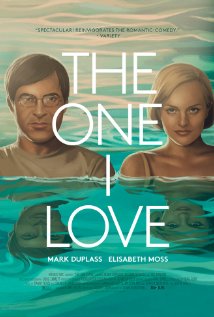 If there is a lesson behind The One I Love, it is this, “Never look a gift horse in the mouth.” That’s it. Good night, folks. Enjoy the movie.

You want more? What it’s about? Well, that’s a little trickier. The set-up: Ethan (Mark Duplass) and Sophie (Elisabeth Moss) have been married for an indeterminate amount of time. It used to be good, but they hit a rough patch and don’t really know how to deal with it or look past it. How long they have been in this rough patch isn’t addressed either, but they have sought counseling from therapist (Ted Danson). He suggests a weekend getaway at a house outside of town. They give it a go, pack their bags and move into a very nice compound in the middle of orange groves.

The house is a typical time-share where the bookshelves are cluttered with Clive Cussler novels, the kitchen is ready for even the most accomplished of chefs and the furniture is generic enough that it might pass for your own. So is Ethan and Sophie’s marriage. They read, go for walks, take naps, etc. They used to be happy, but now they just aren’t. Generic enough that their marriage might pass for yours. Nothing in the house, nothing about their marriage is unique or defined. We don’t know what they fight about or how they connect, they are simply blank slates with two defining qualities: He wears glasses and she doesn’t like them. He loves bacon, but she can’t stand the smell. That’s it, that’s all you get.

So, whom do you love? Do you love the person sitting across the table? The one who smacks their lips when they chew, slurps their milks when they eat cereal? That person has flaws and annoying little ticks. Or, are you in love with all those memories from way back when? When everything seemed perfect and you positively refused to fart or burp in front of them? At some point, every couple has to come to terms that reality and memory are different, and that we must compartmentalize both. In The One I Love, Ethan and Sophie are presented with that dilemma made flesh. Do they live in reality or do they choose memory?

But how does this work exactly? It’s not exactly clear and takes a pretty sizable leap of faith. The movie’s third act tries to explain how this is possible, but can’t quite connect the dots. The real question to ask, is why? Who benefits? Why would anyone go to this much trouble and what would they hope to gain?

However, these are not the questions director Charlie McDowell and writer Justin Lader are interested in. Instead, they are much more interested in how these characters approach this absurd situation. Sophie wants to let go and run with it. She is finally having fun and enjoying herself because Ethan #2 is the Ethan she always hoped for. Ethan #1 loves the freedom that Sophie #2 gives him, but he is far too suspicious of Ethan #2’s motives and Sophie #1’s desires. A moment comes where a choice is made. Was it the right choice? Where do we go from here? Never look a gift horse in the mouth.

Even though The One I Love doesn’t quite work, it still makes for compelling viewing. This is partly due to the excellent work from Mark Duplass. Duplass, who is quickly becoming a ubiquitous character actor, started out as an actor/writer/director with his brother, Jay Duplass, just as the mumblecore movement was taking hold. He has since broken into more mainstream movie and TV roles, but he is always Mark Duplass, that loveable guy that looks like he just stepped out of reality and on to the silver screen. Duplass handles the twists and turns of The One I Love, and many of his other roles, with the same reaction that a normal person might have. Not a normal movie character, but a normal person. Equal parts confusion, humor and acceptance. Moss is good, but Duplass steals the show.

One thought on “THE ONE I LOVE”