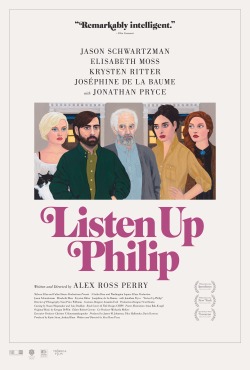 “I want you to contextualize my sadness,” Philip says. “Put whatever you’re going through into perspective.”

Philip delivers this line to his girlfriend, but he might as well address it directly to the camera. Or to the world. As far as Philip is concerned, it’s all the same thing. Galileo was wrong; the Earth is in fact geocentric. And it revolves around him.

In Listen Up Philip, Philip Lewis Friedman (Jason Schwartzman) joins the list of cinema narcissists, a long line if there ever was one. The dialog I chose to open this review comes in the final fifteen minutes and provides the lead-in for information designed to bring empathy and understanding to his characteristics and actions. The speech Philip delivers does enlist a bit of sympathy, but at this point it’s too late. At this point, the girlfriend, Yvette (Joséphine de La Baume), and the audience, have made up their mind about Philip.

Listen Up Philip is the latest feature film from writer/director Alex Ross Perry. At the start of the movie, Philip has just completed his second novel, but refuses to do any press to promote it. Lacking funds and focus for his next work, he takes the advice of his idol and mentor, Ike Zimmerman (Jonathan Pryce) and moves into a summer home in upstate New York with Zimmerman. Seems like a fine idea, except that he leaves his live-in girlfriend, Ashley (Elisabeth Moss) behind without a second thought.

Here, Perry plays with the idea of cinema when the main character leaves the room. Listen Up Philip occasionally breaks free of its titular character and explore the damage left in his wake, most notably Ashley, who we get a first hand account of her recovery from Philip. That recover includes meeting an ex-boyfriend, burying herself in work, visiting her sister and adopting a cat, Gadookey, which turns out to be the most effective step forward, even if she is slightly allergic to him.

German philosopher, Friedrich Nietzsche once wrote, “Be careful, lest in casting out your demon you exorcise the best thing in you.” No fear in that. Philip is the sort of character that speaks his mind with no filter. He says what he believes and believes what he says, wearing his emotions on his sleeve as a form of armor against the world. Should we hold it against him, that the emotion that comes most readily to him is disdain? Philip, like his mentor and idol, Zimmerman, is abrasive, acerbic and incredibly vulnerable. Both look at the world with the same sneer. They hate their colleagues, they hate the women who refuse them and they especially hate the women who love them. They are doing a bang-up job, “Not getting involved with anyone, in a human way,” as Philip tells another ex-girlfriend.

What makes Philip work is the fine line that Schwartzman walks while portraying him. Schwartzman doesn’t soften Philip’s rough edges, but he also doesn’t drag him into the realm of misanthrope. Instead, Schwartzman plays Philip the way any actor should, with total commitment and honesty. Philip acts and talks like a grade-A asshole, but he doesn’t think he is. He thinks that he is a truth delivery device. All grade-A assholes do. Just look at Rush Limbaugh.

Shot primarily with a hand-held camera in the vérité style, Listen Up Philip uses an extensive amount of close-ups to capture the humanity of the actors. Sometimes it is heartbreaking (Ashley), sometimes it is damming (Philip) and sometimes it is smothering. These close-ups are inescapable, but why would you want to run? With a color palette reflecting the heyday of 70s independent cinema, a title design modeled after the novels of Philip Roth and a moody, boozy jazz score, Listen Up Philip is a key work in the foundation of a new independent cinema. Movies that don’t demand the characters to go on an arc, but the viewers. The point is not for the bastard to get his comeuppance, but for the audience to recognize that sometimes the bad guys win, and sometimes, it is we who let it happen.