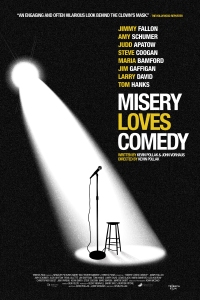 Are unhappy childhoods, pathetic sex and general misery necessary to comedy? Anyone who has attended a stand-up comedy show knows that it is a wheelhouse comics like to visit, but is it actually necessary to creation of the comic? Does misery inherently produce comedy? These questions forms the core of Kevin Pollak’s explorative documentary, Misery Loves Comedy, playing at The Boedecker Theater May 27 – 30.

Pollak is a comic, actor and accomplished poker player, but starting in 2009, Pollak moved toward a longer disscussionary format with his Internet TV series, Kevin Pollak’s Chat Show. The show allowed Pollak more freedom as an interviewer and the ability to explore the larger world of performance and process with his guests. Pollak recreates that style of interview for Misery Loves Comedy, but then chops it up to create a stream-of-consciousness discussion about the stand-up comic.

Comics seem to understand that everyone is miserable to some extent. By talking about it, the audience is allowed to connect with the comic and with each other. In essence, what drives people to the comedy clubs is the same thing that drives people to the cinema, the need for a common experience. Maria Bamford recounts the time where she told the story of how she accidentally killed her dog, which prompted an audience member to shout out that they accidentally sat on their pet rabbit and killed it. Another admits that they hugged their hamster too tightly. Taken individually, these stories are traumatic, but thanks to the power of a shared experience they are alleviating, if not revealing.

Bamford is but one of many (at least 60 by my count) that Pollak interviews for his 94-minute talking-head documentary. The interviewees range anywhere from traditional stand-up comics (Marc Maron, Lewis Black, Amy Schumer) to Hollywood actors who got their start in stand-up (Tom Hanks, Christopher Guest, Bobby Canavale) and everything in between. What Pollak finds, and focuses on, in each of these interviews are the basic commonalities that exist despite vast differences in upbringing or current success.

These commonalities are precisely where Pollak’s documentary shines, as he uses snippets from each interview to echo certain, and significant, thoughts that these comedians hold true, e.g. comedy is a drug, comedy is an outlet, comedy is a connector. But what separates Pollock’s documentary from similar comparisons, is not just the sheer number of interviews, but how he uses them to build one argument for his grand design. Not everyone agrees with the questions Pollak offers, yet they seem to offer similar answers.

However, these commonalities, presented in the manner that Pollak offers, also strips the answers and answerers of their individuality. By cutting from one comic’s answer to another’s to provide confirmation, Pollak essentially chooses the answers that best fit his own personal biases. If Misery Loves Comedy is a stream-of-consciousness exploration of the world of comedy, then that consciousness belongs to Pollak.

But while Pollak controls and constructs Misery Loves Comedy, the entertainment comes from the subjects. Everyone has their reasons for getting into show business, but regardless of reasons, they all share the same base delusions that drove them to this business. Some are more serious than others, and some acknowledge it better than others, but they all have it, and you can see it in every face featured in Misery Loves Comedy. The fun comes from watching them realize it.