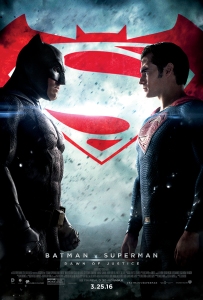 It’s been said many times before — probably every four years — but rarely has it been said with such vitriol, or rung as true: “Americans are going to get the president they deserve.”

Gone are the days of 2008’s campaign of hope and change we can believe in. Nope, nowadays candidates sour the conversation, poison the rhetoric and behave like petulant children. A nation shrugs. We brought this upon ourselves.

The same can be said of Zack Snyder’s perverse and uneven superhero slobber knocker, Batman v Superman: Dawn of Justice.

Picking up during the climatic battle between General Zod (Michael Shannon) and Superman/Clark Kent (Henry Cavill) that laid waste to much of Metropolis, Bruce Wayne (Ben Affleck) races through the city trying to save his employees at Wayne Financial. Wayne looks on in helpless frustration as two gods battle for dominance, but the tragedy in Wayne’s life is that this is not the first time Wayne was a helpless bystander. And for the umpteenth time, the murder of Young Master Wayne’s parents is used to explain a life of vigilantism. Stories must start somewhere, no matter how familiar it may feel.

It is unclear how entrenched Wayne is into his own alter ego, Batman, during Zod and Supe’s fight, but considering how adept he is when the story flashes forward 18 months; there is a sense that Wayne has been rocking the Bat for sometime.

That sense of time, or displaced time, is what Snyder carries over from his Batman franchise predecessor, Christopher Nolan — who functions as an Executive Producer for this installment. Title cards and the occasional mention of passing time invade the script, but they do little as Snyder opts for a piece that is both contemporary, yet mythical in its structure. Batman v Superman is the America of yesterday and today, one where we are shown a world larger than the twin cities of Metropolis and Gotham, yet feels like they are the only place inhabited by humanity. Even Smallville seems just across the bay.

Globetrotting storytelling that returned to a center was a key aspect of Nolan’s Batman trilogy, and Snyder continues that tradition with plot points developing in Washington D.C., the Indian Ocean, Africa and Antarctica but converging in these two iconic cities. However, this is where Snyder’s continuation of Nolan’s enterprise ends, as Snyder has no taste, or predilection, for a light touch. Batman v Superman is a loud, blaring, heavy-handed affair; one where Snyder hammers every point home with a sledgehammer.

This is what ultimately makes Batman v Superman the darkest comic book movie to date as Snyder revels in the high cost of human life when opposing powers go to war. If the body count of Snyder’s previous efforts, Man of Steel (2012), put audiences and critics off, Snyder doubles down by raising the death toll and making it hurt. And from all participants: Batman, Superman, Lex Luther (Jesse Eisenberg), Russian terrorists, the police, whoever. This is one trigger-happy society — an unnamed police officer nearly shoots his partner in a throwaway scene — absolutely terrified by unchecked, uncontrolled power.

The terrorism analogy is obvious, as are the Bushisms of Wayne’s Batman — “If there is a 1% chance that he is against us, we have to take it as an absolute certainty that he will.” etc., etc. Fear governs Snyder’s Metropolis/Gotham. Fear of the unknown, fear of helplessness, fear of a world gone mad, fear of fear itself. On the wall of Luther’s office hangs a religious painting of Judgment Day. Superheroes regress civilization back to the Dark Ages.

But alas, Batman v Superman is not an auteur’s dissection of fear and Americanism — though it is that for the first half of the movie — and while Snyder brings up many fascinating points about what a world looks like with gods among man, the franchise is the ultimate master and ideas must give way to the financial duty of setting up future installments, including Diana Prince/Wonder Woman (Gal Gadot) and a cadre of meta-humans who will comprise an eventual Justice League installment. The time could be better spent, particularly on the character’s motivation and state of mind, but it is not. In lieu of depth, we are left with the echoes of grief and little else. Snyder’s brush strokes are picturesque, but they are broad.

That is what makes Snyder’s second DC installment unsatisfyingly curious. Batman v Superman is three movies stitched together in a not completely convincing way. It is possible that a longer director’s cut will delve deeper into the pessimism that Snyder invokes, maybe even provide more satisfying exposition, but most likely, it will be more superheroes punching each other and teeing up the next movie. After all, that is what drives the audience back to the theater time and time again. Making these movies is like printing money, and the more movies they set up, the better the studio’s financial future looks. With America no longer interested in a president of ideals, but with one of business sensibility, Batman v Superman may not be the movie we want, but it is the one we deserve.