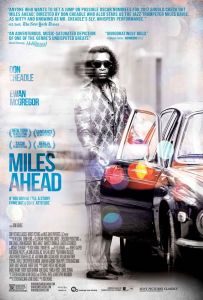 Miles Davis was a man of few words, but an endless stream of music. Though the story of Davis’s meeting with then First Lady Nancy Reagan at a White House dinner in 1987 is most likely false, the punch line is still rings true: When Reagan asked Davis what he’d done to deserve an invite, Davis responded, “I’ve changed the course of music five or six times. What have you done except fuck the president?”

Urban myth or no, that attitude is the attitude of writer/director/star Don Cheadle’s Miles Davis in the bio-pic, Miles Ahead.

Situated primarily during Davis’s reclusive period, 1975–1980, where Davis (Cheadle) spent his days holed-up, drinkin’, druggin’ and trying to come up with the next big thing. Never wanting to revisit the past, Davis was stuck in the terror of the new. Meanwhile, everyone around him — particularly the studio footing the bill, Columbia — wanted just another Sketches of Spain or Still Blue.

Enter Rolling Stone journalist Dave Braden (Ewan McGregor) looking for a story. He weasels his way into Davis’s life, and gets a whole lot more than he bargained for: drug-deals, guns and a high-speed chase to recover Davis’s latest creation.

Running parallel to this tomfoolery, Miles Ahead flashes back to Davis’s relationship with his muse and wife, Frances Taylor (Emayatzy Corinealdi). Davis put undue strain on their relationship by forcing Taylor to give up dancing — she was a ballerina coming to prominence prior to their marriage — and subjecting her to a myriad of one-night-stands and his increasing paranoia, fueled by drugs and drink.

But marital fidelity isn’t the only thing Davis is suspect of. His desire to reinvent himself, to move the form forward, causes him to behave erratically and violently. Cheadle plays the tortured genius card heavily, but he doesn’t let Davis off the hook and shows him as a loose cannon. He brings a gun to a business meeting, hits up a dealer in broad daylight and threatens various individuals throughout the movie — with a real threat behind each word. Cheadle’s Davis is a man who will just as easily follow-up his claim, as he would walk away.

And that is where Miles Ahead separates itself from the standard bio-pic. Cheadle’s raspy delivery and piercing gaze gives Davis a knowledge and venom that should never be softened. Toss in Cheadle’s fearlessness to show rather than tell — during a boxing match, the fighters are sporadically replaced by Davis’s band — prove that Cheadle is not afraid to swing for the fences. It is a kind of bravado and fearlessness that doesn’t always land, but always feels fresh.

As an actor, Cheadle is one of the best. In Miles Ahead he clearly understands his character and what he want to draw out of Davis. Miles Ahead is also Cheadle’s first foray as a director and he knows that a lot of bio-pics are dusty, boring and formulaic. They need a healthy shot of fascination, and Cheadle provides that. It’s not quite jazz, but it certainly isn’t square. With a little work and refinement, Cheadle will figure out how to tell a story in the traditional manner. Here’s hoping that day never comes.