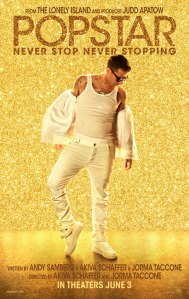 Modern celebrity is a hard concept to parody. The 24-hour news cycle and websites operating via click-bait headlines drive the madness while social media shoulder the personal aspect of the downfall. But these are merely the instruments that over-bloated egos hoist themselves with. Give someone enough rope, and they are bound to hang themselves.

And they do, time and time again. Making the question behind Popstar: Never Stop Never Stopping not why parody it, but how?

Childhood friends cum comedic rap/pop group, The Lonely Island — Andy Samberg, Akiva Schaffer, Jorma Taccone — broke through on Saturday Night Live with their pithy and pitch-perfect digital shorts. These small vignettes parodied stylized storytelling with an acute eye, but it wasn’t until their nerd-themed raps that the group went viral. Leaning heavily on the pop-rap, The Lonely Island parodied extravagant lifestyle; ridiculous acts of defiance and a fixation on their phallus. The music was catchy, sounded as good as anything on Top 40 radio, and featured some of the biggest recording artist at the moment, notably Justin Timberlake, T-Pain and Julian Casablancas.

The appearance of these recording artists — and Michael Bolton, to great effect — gave The Lonely Island an air of authenticity. They were poking fun, but they were doing it in the right spirit and they got others to go along with them. It’s a style that works, but the inclusion of the Bolton and T-Pain undercuts the overall intention of mockery. With this much production value and earnestness, the music edges on this side of genuine. Why not play songs about being on a boat on terrestrial radio? Others have rapped about less, and with less invention.

That is what makes Popstar: Never Stop Never Stopping lightweight. On the surface, it is an accurately produced parody of Justin Bieber’s Never Stop Believing, but it is also a parody of the over-bloated, over-the-top life styles of the flavor of the month. Revolving around three life long friends, Popstar is a faux-documentary about the rise and fall of Conner4Real (Samberg), the lead rapper in a popular boy band, The Style Boyz, who has gone solo.

With their big hit, “Donkey Roll,” The Style Boyz broke from obscurity to the mainstream and influenced a generation of musicians and rappers — real-life musicians give on-camera interviews discussing the impact of The Style Boyz, Usher even credits “Donkey Roll” with teaching him how to dance. Fame breaks up the band and Conner4Real (Samberg) heads out as a solo act, dragging along Style Boyz producer, Owen (Taccone), to craft artistically unchallenging beats to accommodate Conner’s uninspired raps. Lawrence (Schaffer), the lyricist of The Style Boyz, moves to Colorado and starts a farm and buries himself in woodwork, something he has neither the knack, nor the inclination, for.

Conner’s first solo album, “Thriller, Also,” was a worldwide success, and now Conner wants his follow-up to be bigger and better. But with songs that equate a woman’s sexual desire to the actions of the U.S. military and Osama Bin Laden, “Finest Girl,” or how the Mona Lisa is an overrated work of art, Conner4Real fails to reach an audience and must turn to other means to raise his profile, including bringing on along a genuinely psychotic street-rapper, Hunter the Hungry (Chris Redd, one of the movie’s standout performances).

The look and feel of Popstar is closer to VH1’s Behind the Music than Spinal Tap, but it is still funny. Not all the jokes land, not by a long shot, but they come fast and furious with punch lines landing two or three per minute. The draw back is that none of the jokes are allowed to develop and payoff at a later time. Everything is doled out in heaps. When one joke is allowed to run its course — as in the TMZ, here CMZ, newsroom parody — the first installment hits, but the third completely runs out of gas.

Samberg, Schaffer and Taccone know their milieu well and they manage to construct a narrative that last longer than three minutes. Unlike Keanu, which also has its roots in small doses of parody, Popstar looks like a feature film and has the trajectory to match. Just don’t expect much beyond that. Those Lonely Island music videos and SNL Digital Shorts may have inspired multiple viewings, but Popstar doesn’t. It’s all surface and promises nothing upon further investigation. But, there are much worse ways to spend 86 minutes.