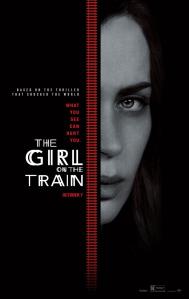 Rachel (Emily Blunt) has problems. As she rides the train from Manhattan out to White Plains, NY, she gazes wistfully out her window at all those pretty houses full of pretty people living their pretty lives. How nice it would be to be one of those pretty people, Rachel thinks as she takes another swig of vodka.

Rachel used to be one of those pretty people, but that was before Rachel started slamming water bottle vodka on the train. Rachel turned to the bottle a few years ago when she found out that she couldn’t have children, and her husband, Tom (Justin Theroux), tired of her self-pitying ways, left her for the girl at work, Anna (Rebecca Ferguson). That certainly didn’t help Rachel’s pride any, and further down the bottle she went.

But despite Rachel’s observations, all is not well within those pretty walls. At home, Anna has learned that her nanny, Megan (Haley Bennett), is leaving her to pursue another career path. Anna doesn’t work, but this cramps her style considerably and makes trips to the farmer’s market that much more difficult. Megan scoffs at Anna’s white privilege, though she joins her in it. Those in the audience do the same, and they will for the remainder of the runtime.

To say more would give away too much of The Girl on the Train’s multiple twists and turns for some. But twists and turns are not enough to build an entire movie, and Girl drunkenly stumbles through red herring after red herring, hoping that it will all amount to something. It does not.

Directed by Tate Taylor and adapted for the screen by Erin Cressida Wilson, The Girl on the Train is based on the novel by Paula Hawkins and occupies the same pulpy world of Gone Girl, or wishes it did. This Girl has equally detestable characters doing detestable things, but they do them with much less flair. There are moments where Taylor attempts at style — shaky, blurred slow motion to reconstruct fragments of Rachel’s drunken state — and the narrative is jumbled around to purposefully keep viewers in the dark, but none of it adds. It just distracts.

The Girl on the Train is just another spider’s web of a plot where multiple narrators, some of them unreliable, spend more time trying to understand their own position in the plot than they do the characters standing directly in front of them. To put a visual bow on it, one character stands in the background and watches two other characters during the movie’s climax. If action is reaction, then Girl died on the vine a long time ago.