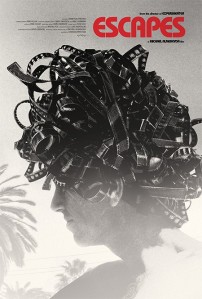 duende \dü-en-(,)dā\ noun: the power to attract through personal magnetism and charm

To make it in Hollywood you got to have duende and Hampton Fancher has duende in spades.

Born July 13, 1938, in East Los Angeles, California, to a merchant marine and a dancer of Mexican/Danish descent, Hampton Lansen Fancher III was a kid bursting to get out. Terrible at school, he voluntarily removed himself and hopped a freighter out of Galveston, Texas and headed off to Spain. He studied flamenco dancing and named himself “Mario Mantejo.” He was 15.

No path to Hollywood is typical and as Fancher recounts his life and relationships in Michael Almereyda’s latest documentary, Escapes, Fancher’s assent to Hollywood — first as a dancer, then as an actor, now as a writer — is both coincidental and inevitable.

Divided into 7 sections, Almereyda presents Fancher’s life as a series of jobs stitched together by relationships. These relationships comprise the bulk of Escapes and though Almereyda gives a comprehensive account of Fancher’s bit roles, Escapes focuses primarily on Fancher’s loves and losses: Terri Garr, Sue Lyons, Barbara Hershey, and his closest friend, Flipper star, Brian Kelly.

But this is burying the lead. While these stories make Fancher a fascinating subject, those unfamiliar with Fancher’s one major contribution to cinema will wonder what the hook is. The hook: Fancher was the unlikely writer and producer of Blade Runner and the last act of Escapes is devoted to the wheeling and dealing behind the making of the iconic film, the trouble with adapting Philip K. Dick’s novel, and what the movie means to Fancher.

Few films elicit the level of obsession Blade Runner has. And with the long-awaited sequel, Blade Runner 2049, also penned by Fancher, due out this October, now is the perfect time to take a look at some of the lesser-known names behind the major movies. Hampton Fancher may not be an Orson Welles or a Martin Scorsese, but he can spin a yarn just as good.

Escapes is in limited release.