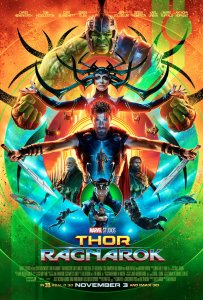 The God of Thunder returns and he’s bringing the pyrotechnics to Marvel’s latest installment of sound and fury. Thor: Ragnorak, the 17th installment in Marvel’s Cinematic Universe, continues the latest trend of Marvel movies: irreverent humor, ironic heroes, and plenty of neon razzle-dazzle. And while these tricks entertain — and Thor is generally a good time — none of the frosting helps Marvel’s ongoing issues with bloated storylines, uncompelling villains, and bland third act battles.

Picking up sometime after the events in Doctor Strange and opening in a Norse underworld, Thor (Chris Hemsworth) battles a hoard of demons led by Sutur, a massive being of fire and horns who threatens to initiate Ragnorak and destroy Thor’s home, Asgard. Naturally, Thor bests Sutur and heads home with his trophy only to find Asgard weakened by peace and ruled by Loki (Tom Hiddleston) in disguise.

None of this takes up a whole lot of screen time, nor does a quick trip to Earth to meet Dr. Stephen Strange (Benedict Cumberbatch), chat with Odin (Anthony Hopkins), and meet Hela (Cate Blanchett), the goddess of death and Odin’s former ally. Sporting a whole lot of horns and channeling a little bit of Maleficent, Hela shows up and makes quick work of Thor, sending him to Sakaar, a planet of garbage and ruled by the Grandmaster (Jeff Goldblum, who doesn’t try very hard).

While on Sakaar, Thor meets a Valkyrie (Tessa Thompson), finds himself on the wrong side of a Hulk Smash (Mark Ruffalo), recruits Loki to his side, builds an army of alien gladiators, and returns to Asgard to battle Hela and take back the throne. If that sounds like a lot, it is. And most of it is forgettable a week or so later.

As it is with most Marvel movies, the story is secondary to the characters, who are positively lovable. Thor: Ragnorak is no exception and, in some regards, even better than previous installments. Gladiator Korg (director Taika Waititi in a motion capture suit) and Hela’s lackey, Skurge (Karl Urban), try their best to steal the scene and most of the time they do. But it’s Thor’s movie and if anyone is going to get the best lines, it’s the God of Thunder.

Those lines waffle back and forth between comedy and something verging on SNL parody. There is no doubt that Marvel hired Waititi — a New Zealander known for his comedies — to inject humor and energy into their Thor franchise, which has the unfortunate distinction of being the lesser films in the MCU. They certainly got a whole lot of comedy from Waititi, but they also got a heck of a lot of mugging and a plethora of meta-moments. Toss in neon galore and a soundtrack from Devo’s Mark Mothersbaugh that sounds a little like rejects from the Freedom of Choice sessions and Thor: Ragnorak certainly has a vibrant taste. Too bad it dissipates quickly.