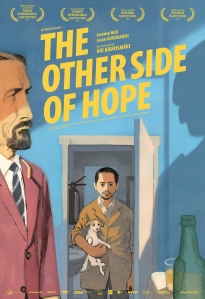 There is humor to be mined from the direst of situations and Finish filmmaker Aki Kaurismäki has been doing just that for nearly 35 years. His latest, The Other Side of Hope (Toivon tuolla puolen), takes his well-honed, delightfully peculiar style and applies it to Europe’s refugee crisis.

Though The Other Side of Hope is set in modern-day Helsinki, nothing in the movie feels modern. Everyone smokes constantly, drinks heavily, and sits in garishly painted sets that look like leftovers cobbled together from Rainer Werner Fassbinder’s days in Germany. Toss in Kaurismäki’s flat framing and the actor’s deadpan reactions to the world around them, and you’ll begin to see The Other Side of Hope as a fairy-tale for a cruel and indifferent world; indifferent toward Khaled (Sherwan Haji), a displaced Syrian seeking asylum, and indifferent toward Wikström (Sakari Kuosmanen), a salesman who dreams of owning a restaurant.

Khaled and Wikström’s paths cross twice, first at the crossroads of their respective lives, second when Khaled needs a helping hand. Later on, we’ll learn about Khaled’s harrowing journey to freedom in detail but Wikström’s backstory is a touch more oblique. Only a quick interaction with his ex-wife betrays the burden Wickström once carried.

These moments are what make The Other Side of Hope such a lovely and humane film, but it is Kaurismaki’s idiosyncratic framing and structure that make it hilarious at the same time. It’s not always easy to laugh at the bleakness of life, but there comes a moment when either we must or we will break into a thousand pieces, never to be assembled once again. Thank goodness we still have some clowns that help light the way.

The Other Side of Hope is in limited release.