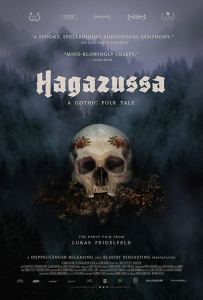 Written and directed by Lukas Feigelfeld, the Austrian/German film Hagazussa: A Heathen’s Curse is divided into four chapters: Shadow, Horn, Blood, and Fire. In Shadow, a single mother cares for her daughter in a lone cabin located somewhere in the 15th century Alps. Completely isolated from the nearby village, the mother grows sick and strange.

Jumping ahead 15 years, Horn picks up with the daughter, Alburn (Aleksandra Cwen), now a grown single mother on her own. Not that she has much interest in interacting with the villagers, save for one. Alburn prefers to spend her days and nights among her goats, where she is overcome by unusual desires and voices in the dark.

There is nothing explicitly demonic about Hagazussa — Old High German for “witch” — but there is little doubt from moment one that a specter of evil haunts mother and daughter. Feigelfeld tries to capture this specter as looming inevitability but finds only lugubrious monotony. Mariel Baqueiro’s cinematography is impressive, Cwen gives a committed performance, but the movie’s lack of momentum — bogged down by MMMD’s droning, repetitive score — adds little. Worse yet, a rape scene halfway through does nothing to change Feigelfeld’s tempo. It’s a boring movie and Feigelfeld seems bored making it.