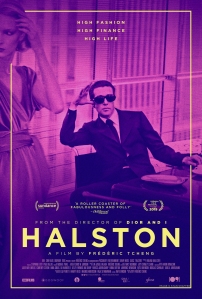 Who was Roy Halston Frowick? He was the man who stuck a pillbox hat on Jackie Kennedy’s head before her husband’s inauguration in 1961. He was the gay kid from Des Moines, Iowa who brought New York fashion to both Paris and Beijing. He was the man who sold his line and name to JCPenney, claiming he wanted to “dress all of America.” He was friend to Liza Minnelli, inspiration to Andy Warhol, and regular at Studio 54. And on March 26, 1990, Halston died from AIDS-related complications. He was 57.

Halston is the latest documentary from Frédéric Tcheng, whose previous film, Dior and I, was an impressive piece of cinema vérité set in the world of haute couture. Granted, in Dior and I, Tcheng benefitted from a subject who was still alive and working. That’s not the case with Halston, and the results are disappointingly bland and routine. Tcheng tries to add a little juice into a collection of talking heads and archival footage by casting Tavi Geninson as the movie’s narrator, but it adds nothing. It’s a made for TV movie, CNN Films, and despite a little bit of Liza Minnelli singing, there isn’t much here to seek for those who haven’t the foggiest idea who Halston was. For those who do, Halston is the usual trip down memory lane with the usual views of all the standard landmarks.