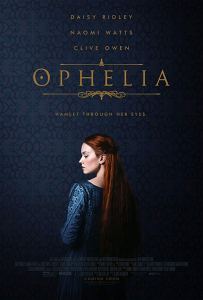 “You may think you know my story,” Ophelia (Daisy Ridley) tells us. And for most of us, we think we do. She is Ophelia, daughter of Polonius (Dominic Mafham), brother of Laertes (Tom Felton), and girlfriend to Hamlet (George MacKay). But, as her ominous line suggests, we do not know the whole story.

Ophelia, based on the novel by Lisa Klein, recasts Shakespeare’s mad adolescent as one of the more cunning characters in a play populated by madness. Here, Ophelia is the favorite maiden of the Queen (Naomi Watts in a dual role) and Hamlet’s secret bride. Deceit is rampant, poison is ubiquitous, and there’s a whole lot of something rotten in the Kingdom of Denmark.

Adapted by Semi Chellas and directed Claire McCarthy, Ophelia has a workmanlike quality to it. The inventions and imaginations are a product primarily of the story and not of the visuals — which leans heavily on slow motion and handheld camerawork to compose images befitting of a fantasy novel book jacket. The performances are good, and the atmosphere adds much, but the movie is stationary when it ought to feel like a breath of fresh air.