Obsessed individuals, few things are as entertaining to watch. Their motivation, their endurance, their insanity can be quite hilarious while simultaneously awe-inspiring. Jeff Orlowski’s latest documentary, Chasing Ice, follows nature photographer James Balog and his team as they trek up glaciers all in the name of environmentalism. Or maybe it’s in the name of photography. Regardless why they do it, they do manage to get some killer footage while trying to do some good.

Chasing Ice doesn’t waste any time hitting us over the head with a bunch of statistics trying to convince us of global warming. The documentary accepts that global warming is present and shapes the world around us. Balog states that he doesn’t want to make a slide show to try to sway people’s perception, he wants concrete photographic proof of global warming. He settles on glaciers and selects four locations, Alaska, Greenland, Iceland, and Montana. What he gathers and brings back is a snapshot of a changing time, a world that is evolving and shaping all around us. These pictures aren’t just proof of global warming, they the evidence of man’s impact on the environment. These pictures are a memory of something that was but is no more.

Balog puts together a team to help him carry out his plan, The Extreme Ice Survey. Wanting to photograph these glaciers that are melting in record amounts each year, Balog suggest that they anchor cameras near the glaciers and set them on timers to take a photo ever so often. One year later, they will revisit the cameras, take the memory stick with the photos, and run it all together like time-lapse, and viola, unmistakable proof! Naturally, a simple idea becomes more complicated as they have to figure out how they are going to anchor the cameras, protect them from the harshest of elements, and set them up to take the right amount of pictures at the right intervals. Once that is figured out, they have to hike up this treacherous terrain, plant the cameras, and wait a year. When they come back, things are not quite as they hoped, some of the cameras didn’t take the pictures, some froze solid, some were completely destroyed by ice and wind, but a few survived and provided Balog with the footage he needs. He returns with the evidence, and has since been gathering more and more footage and photos for his nationwide talks on warming glaciers and their impact.  Anyone who lived in New Jersey and New York during Super Storm Sandy, doesn’t need to be told what impact this is having.

This is not a documentary with a gripping narrative and it clocks in at a very merciful one hour and twenty minutes running time. Act one, everyone is introduced and they talk about what they are going to do. Act two, they do it. Act three, they reflect on what they did. There is a set-up and payoff that function like a climax, providing to be one of the most fantastic things I have seen in film this year. Early on in the doc, we are shown and explained ‘calving’. As the glaciers melt, the water cuts veins into the glacier, eventually separating a section of the glacier off. This is how icebergs are made and we get to watch a small one calve off. Later on in the doc, two of Balog’s scientists are stationed in the same place for ten days as they await a nearby glacier to calve. When it does, the iceberg produced is the size of Lower Manhattan. Some things, you just gotta see.

Enough time is spent with Balog and his families discussing what type of impact all this glacier business has brought them. His wife is very patient and understanding as her husband risks life and limb for his photos. Balog has destroyed his knees with all the climbing he has done, but he doesn’t seem to mind. He suffers for his art, but I don’t think he sees it as art. He probably sees it as a world service. I suppose musicians and poets feel the same way about their work. Here is a quick eighty-minute look into a man’s life, his work, and those glaciers that are disappearing faster than they should. 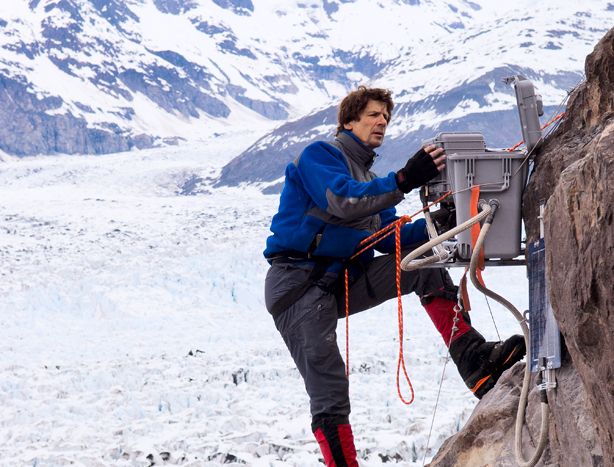 One thought on “CHASING ICE”