The East is a domestic terrorist group that terrorizes big business and corporations that commit heinous acts against nature in the desire for greater profits and lower costs. We are introduced to their mission statement, a YouTube video the organization uses to advertise its presence and to document their acts. They call these acts “jams” and the first jam targets the residence of an oil tycoon whose tanker ship sprung a leak in the gulf destroying wildlife and the natural habitat. The East gives the tycoon a taste of its own medicine and pumps oil into his house through pipes and air ducts. The security cameras capture footage of crude oil bleeding from heating vents and running down the walls, a terrifying violation of house and home. This video comes with a voice over from one of the members, letting the world know that they are watching and they are coming. The sentiment expressed is similar to the one Tyler Durden gave us over a decade ago in Fight Club, “We cook your food, we take out your trash, we guard you while you sleep. Do not fuck with us.”

The East is a rag-tag bunch of domestic terrorist, or activist, depending on how you view their message. To try to combat the threat, Sharon (Patricia Clarkson) runs a business that insures corporation against these guerilla attacks. She takes on a client, hires a young FBI Agent, and attempts to plant them as a mole into the terrorist cells. The mole then reports on the participants of the organization and arrests are made.

The mole that finds her way into The East is Sarah (Brit Marling). She goes immediately undercover as a hippy/drifter type, sleeping out on beaches, hanging out with communes of young adults, trying to get an introduction without acting like she wants one. A series of fortuitous events lead her to helping out a member of The East, Luca (Shiloh Fernandez) who brings her back to their headquarters. The leader of the group, Benji (Alexander Skarsgård) and Izzy (Ellen Page) aren’t thrilled about taking on a new member, but Sarah quickly makes friends with Doc (Toby Kebbell), Thumbs (Aldis Hodge), Tess (Danielle Macdonald), and Eve (Hillary Baack), and is allowed to stay.

Of the group, Benji is the most compelling. Tall, bearded, charismatic, impossibly fit and good-looking, and of course long, flowing, blonde hair. He preaches unity and community, but he seeks revenge on those that he feels have wronged the world. We quickly find out that the intent behind each jam has less to do with public shaming and education, and more to do with personal vendettas dressed up as social commentary.

Sarah’s first jam involves sneaking into a launch party for a prescription drug and slipping the drug into the guest’s champagne glasses. Doc explains to Sarah that the drug contains horrendous side effects, but has been approved for manufacturing and distribution because the company releases all potential side effects as a disclaimer. Doc lost his sister to the drug and now he suffers from Parkinson, and this jam is his way of exacting revenge. Sarah calls Sharon to inform her of the jam, but the drug manufacture is not one of Sharon’s clients and she advise Sarah to not do anything that might blow her cover. The drug manufacture only cares about money, The East only cares about revenge, and Sharon only cares about her client. Sarah doesn’t know what to do, whom to side with, and is left stuck in the middle. She is one of those oil soaked birds that is helpless to leave its situation. Neither the bird nor Sarah did anything wrong, they were simply caught at the wrong place at the wrong time.

The timing of The East could not be better. Pulling from the current zeitgeist of have-nots versus the haves, the Occupy Movement has manifested itself into both mainstream and independent narratives. In April, Michael Bay gave us Pain & Gain where Daniel Lugo didn’t just want to steal Victor Kershaw’s fortune, home, business, and life, he wanted to make sure that Kershaw knew it was taken from him. Robbing from the rich and giving to the poor is leveling the playing field, but Lugo wants to punish those that have, and the have-nots simply become beneficiaries by default. The East wants to teach the wealthy of their wickedness and punish them as well. This theme is present in another mainstream movie out this week, Now You See Me from Louis Leterrier. Now You See Me targets a bank, an insurance company, a safe manufacturer, a man who thinks that he can capitalize on exposing and exploiting the secrets of others, and gets the better of them all. I wonder what Daniel Lugo, The East, and The Four Horsemen all see when they look into the mirror. Who do they see staring back at them? Modern day Robin Hoods or common criminals? Revolutionists or terrorists? People that inspire hope and optimism or fear and terror? Whatever they see, the motivation is inescapable, anger. The anger is palpable, the anger is real, and the message is clear, “Do not fuck with us.” 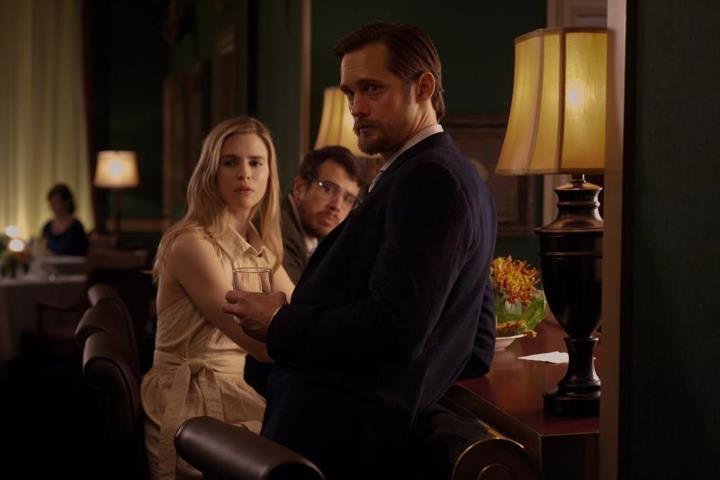 One thought on “THE EAST”