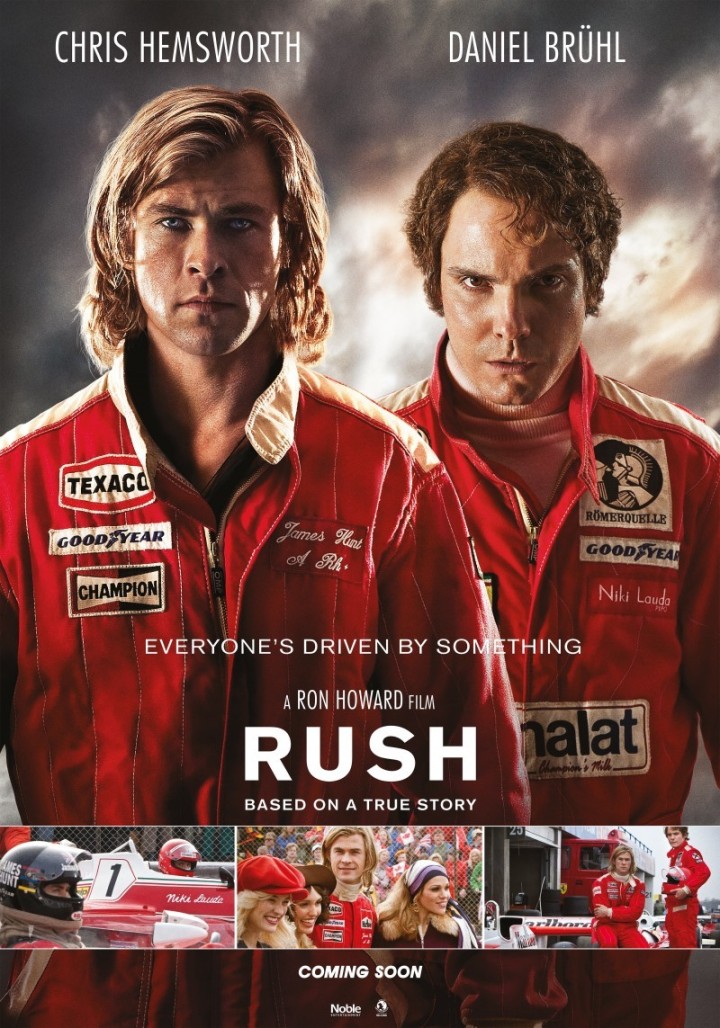 That wind you can feel is me breathing down your neck. Next time, I’ll have you.

There is no one reason that we go to the movies, every viewer seeks something different. Most go to have their lives and world reflected back at them. They see the bad and heed the warning signs, they see the good and feel better, but mostly they go to see that yes, we are here, and yes, we exist. Why people watch sports is a different animal entirely. We love competition, to see one athlete, one team, one country rise above the rest. We love the suspense of not knowing how it could and will end. A movie you can re-watch a dozen times and glean something different with each viewing. Once a match or a game is over, that is pretty much it, time to move on to the next. Which makes me wonder, why do we watch sports movies? Anyone who is interested how the Formula One championship of 1976 turned out can easily look it up, the suspense of not knowing has been removed. But we watch. We watch because of the rare and captivating moment in sports, the rivalry: two athletes, at their best, competing against each other. Some rivals enjoy the others company, most hate them, but all respect them. No one has an undeserved rival. In each other, they sense themselves. They see their abilities, their drive, their passion, and their sacrifice. Bird and Johnson; Federer and Nadal; Hunt and Lauda. James Hunt in the McLaren and Niki Lauda in the Ferrari. This is the stuff of legends.

“Men like women, but men love cars!” Lord Hesketh (Christian McKay) shouts as the cars roar to life. Sleek beasts that rumble with fury and fire. Hunt (Chris Hemsworth), an Englishman, and Lauda (Daniel Brühl), the Austrian, find their battlegrounds on the tracks of Brazil, Spain, England, America, Germany, France, and Japan. Lauda is driven, meticulous, methodical. He derives no pleasure from the race beyond being the best at what he does. His rush comes from excellence. Hunt has a God-given talent that requires some discipline, but his true strength comes from his fearlessness. His rush comes from living fast, complete with women, drugs, and booze, “The closer you are to death, the more alive you feel. It’s a wonderful way to live. It’s the only way to drive.” 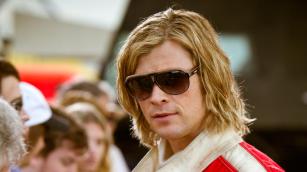 The majority of the running time takes place over the course of the 1976 Formula One season, tracking Hunt and Lauda chasing each other for the world championship. Completing and placing in a race will garner you a certain amount of points, and at the end of the season, whoever has the most points wins. The first five races sees Lauda in control, he’s not that much better than Hunt, but enough. Then tragedy strikes and Lauda is in a terrible crash that burns his face and lungs. While he recuperates in a hospital bed, Hunt racks up points on Lauda. Like the best athletes who somehow manage to will themselves into shape, Lauda gets back in the car after a month out of commission. This leads everything to one final race in Japan. For Lauda to win, he must place. For Hunt to win, he must beat Lauda. At the base of Mount Fuji there is concern, rain soaks the track and the racers are anxious. Rain had already caused one terrible accident of the season, should they risk it again? They must, the TV rights have all been sold and the show must go on. Any climax worth it’s salt should happen in the rain. This race, this rivalry, and this movie has one heck of a good climax. 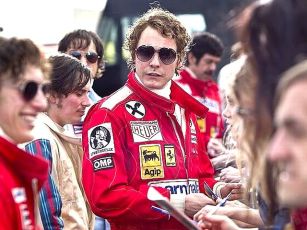 One look at the poster of Rush and you might think this is Hunt/Hemsworth’s movie. He is the beautiful white actor with the flowing blonde hair, and advertisers still and will probably always think that way. Thankfully, narrator and point of view belongs to Lauda. A good thing, considering that with Lauda we can identify and sympathize. Lauda is the hard worker, the faithful husband, and the consummate devotee to his craft. Brühl plays Lauda wonderfully, without any pity or self-deprecation. He knows he’s not attractive, not nice, and uncompromising. Hunt on the other hand is a womanizer, a boozer, and arrogant. Hunt is fun and funny, but not even Hemsworth’s charm could make us crack Hunt’s hard outer shell. Rush favors Lauda, as did history.

To make Rush, director Ron Howard had to seek financing outside the studio system. That makes Rush his first independent production since Grand Theft Auto, his 1977 debut for Roger Corman. Rush may be an independent production, but Howard is no independent director. He is a studio filmmaker of the highest esteem, a very capable storyteller with lots of gloss and entertainment. His job is, excite first and educate second. Howard is not trying to be inventive, or re-write history, he is trying to keep that “middle-of-the-road” production alive. The $30 million dollar film that is designed for adults and does not talk down, nor bowl the audience over with metaphysical revelations. There are no poop jokes, no transcendental shots of nature. There is some swearing, but it’s far from gratuitous. You will see a few naked bosoms during the lovemaking scenes, but they are not designed to exploit the actresses. Everything is in taste. I doubt anyone would be offended by this movie. I equally doubt that anyone will be bored with it. 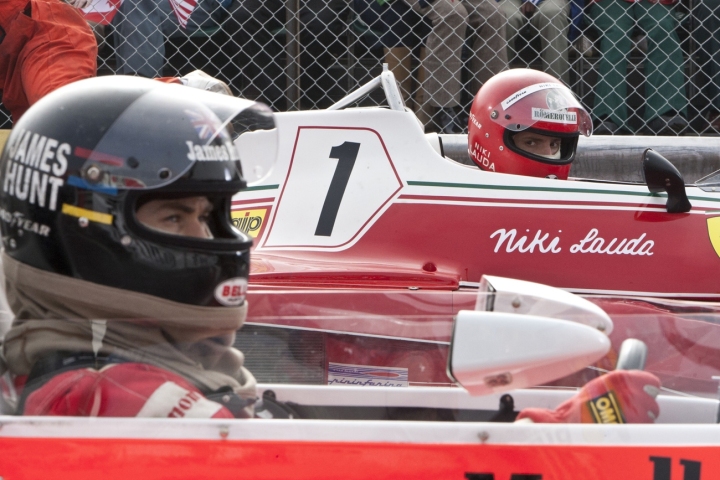 One thought on “RUSH”