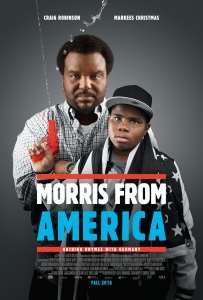 Growing-up is hard. Growing-up in a strange land is even harder. That’s what Morris (Markees Christmas) is dealing with. His father, Curtis (Craig Robison), moved the two of them out of the Big Apple and into the 500-year-old city of Heidelberg, Germany. Curtis coaches soccer — he used to play for a German team — and Morris raps, or tries to. That’s how he hopes to get out.

Thirteen-year-old Morris doesn’t know much about life outside of gangster rap, which he listens to non-stop. He idolizes Jay-Z and has Biggie memorized. When he comes up with his own rhymes, the best he can manage is his Mom on the pipe and his Dad in the slammer. For someone starting out, imitation isn’t flattery; it’s lack of imagination. Curtis tries to convince Morris to rap about his own life, but Morris isn’t hearing it. He knows who he wants to be: someone else.

Or maybe somewhere else. With his black skin and cherubic features, Morris sticks out like a sore thumb in a sea of blue eyes, blonde hairs and flute playing bullies. One girl catches Morris’s attention, an older girl, Katrin (Lina Keller), who smokes, drinks, does drugs and parties constantly. With a hint of sexual adventure, what is not to love? To his detriment, Morris begins to flirt with her.

Thirteen is a crucial time in both the child and the parent’s life as it becomes obvious to both that maturity is just around the corner. As Morris pulls away from his father — not hanging out with him, going to the movies together, telling him where he is going and not answering his phone — Curtis realizes that his son is starting to go and isn’t sure how, or where, to establish boundaries. This dynamic is the heart of Morris From America but it is a quiet heart, beating softly just below the surface. There are genuine moments — Curtis appearing as a reflection in a window Morris looks out of — but there are also plenty of clunky ones. Particularly Curtis and Morris addressing their sexual deprivation: Curtis with a sex hotline, Morris with a pillow.

Around this father-son relationship, writer/director Chad Hartigan constructs the trappings and pitfalls of teenage life: sex, drugs, rock ‘n’ roll — club music really — bullying, defiance and identity. All of it resonates. And in many scenes, it draws a laugh, but something is lacking. Maybe punch, maybe dramatics. Formally, Hartigan films his story in a constrained and beautiful manner, but something is still missing. The aspect that works best is the soundtrack, which blends aggressive hip-hop rhymes with a stone cold groove. That is the tone the movie is aiming for, an ironic and detached sense of machismo, but Morris from America doesn’t quite pull it off. Morris does make you laugh, which is much more than one can say about so many other near misses.