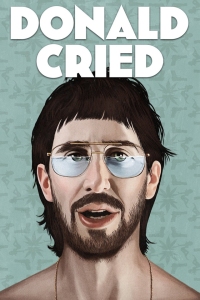 Peter Latang (Jesse Wakeman) left his small Rhode Island home years ago, but the death of his grandmother has beckoned him back to the snowy working-class neighborhood of Warwick. En route, Peter loses his wallet and finds himself stranded on familiar ground. With no one else to turn too, he calls on his former next-door neighbor and childhood friend, Donald (Kris Avedisian).

Peter isn’t exactly thrilled by having to rely on Donald, but Donald couldn’t be happier than to lay eyes on Peter once more. Peter left Warwick in search of New York, money, women and power. Donald didn’t move one iota. Instead, he stayed in the same house, listened to the same heavy metal, slept in the same bed — under a pornographic poster — drove the same minivan and, most likely, kept the same haircut. For Donald, it’s as if time stood still while he was waiting for Peter to return.

Some might take one look at Donald and see him as a man stuck in the past. They would be wrong. Donald isn’t stuck; he chose to remain like this. High school was Donald’s high water mark. His friends were just as awkward and goofy as he was. They were probably pretty bad at school, with girls and with their parents. Who cares? As long as they had each other, some movies to watch, music to listen to and a secret clubhouse to hideaway in, life was manageable.

There is a cringing familiarity to Donald Cried — writer/director Avedisian’s debut film — but it’s not just the discomfort Donald brings Peter. Everyone has at least one Donald in their life. They dread running into them when they go home for holidays and funerals, dread making up excuses for why they never stay in touch and they especially dread falling back into old habits around them. If Donald Cried was strictly about the Donalds of the world who never grew up, then it would be a cruel joke on a specific type of person. Instead, Donald Cried isn’t about the overgrown man-child waiting for you at home, it is about the Peters who leave because they think they’re better than the Donalds.

Sans wallet, Peter must rely on Donald for rides and money. To accomplish this, he connects with Donald just enough to get what he wants: a ride here, a 20-spot there and a couple of joints by the river. There is even the promise of a movie date until the prospect of sex with his realtor (Louisa Krauss) distracts him. The way Donald reacts to this news tells you everything you need to know about their formative years.

If we’ve all known at least one Donald in our lives, then we’ve all been a Peter at one point or another. You can go home again but maybe you shouldn’t. You may not like whom you’ll find there. Especially if it’s you.