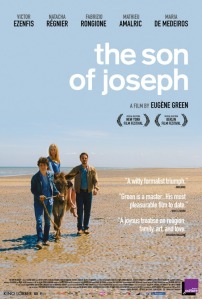 The Son of Joseph begins with two young men poking a rat in a steel cage with a prod. The rat scurries from one part of the cage to the other, trying to evade the prod but his efforts are futile. At one point the rat starts to fight back, biting the rod. “Try poking his eyes out,” one tells the other. “I can’t,” the friend responds. “He’s too clever.”

For the next 110 minutes, we are that rat and writer/director Eugène Green is the man prodding us with both his ideas and his style.

Divided into chapters — ‘The Sacrifice of Abraham,’ ‘The Golden Calf,’ ‘The Sacrifice of Issac,’ ‘The Carpenter,’ ‘The Flight Into Egypt’ — and proliferated with religious iconography — Caravaggio’s Sacrifice of Isaac hangs on Vincent’s bedroom wall — The Son of Joseph is a movie rife with Biblical references. Resolutely Judeo-Christian, this story of a young man, Vincent (Victor Ezenfis), in search of his biological father instead finds a surrogate, Joseph (Fabrizio Rongione), who is both patient and understanding.

Vincent sets-up Joseph with his single mother, Marie (Natacha Régnier), a quiet woman who likes going to quiet movies, and the two hit it off and Vincent gets both a lover for his mother and a guide. Joseph even convinces Vincent to give up his plan of vengeance against Oscar (Mathieu Amalric) because, as Joseph says, “God is in us. He tells us to love.”

Both a deadpan comedy and a religious allegory, The Son of Joseph is a cross between the works of Robert Bresson and Yasujirō Ozu. Green aims for a movie with a deliberate pace and style that both engages and distances the audience. Much like Ozu, characters speak directly into the camera as if we are on the receiving end on both sides of every conversation. Like Bresson, the performances are stripped of overt emotion, transformed from actors into “models” (Bresson’s word), thereby rendering each line and expression into its basest form.

While this approach works for most of the movie, Green lacks Ozu’s knowing humanity and Bresson’s rigor. Instead, The Son of Joseph tries our patience until we fall into sync with its rhythm and surrender ourselves to its images, which are quite lovely. For some, that moment may come too late and produce too little. So it goes.