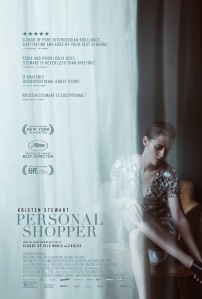 Not everyone can shop for themselves. Some aren’t very good at it, some are too busy and others are too well known to walk into Cartier without TMZ hounding them out the door. For the high-class clientele, a personal shopper is a must and Maureen Cartwright (Kristen Stewart) fills that role for international actress and model, Kyra (Nora von Waldstätten).

Maureen’s relationship with Kyra isn’t great — Kyra treats Maureen like crap and Maureen reciprocates with animosity — but neither is her relationship with her boyfriend, Gary (Ty Olwin), a computer programmer working in another country. They communicate exclusively over Skype and only when Maureen feels like it and she really doesn’t feel like these days. She is too busy waiting. Waiting for her crappy job with Kyra to end, waiting for her art career to take off and waiting for her dead twin brother to contact her from beyond the grave.

Maureen’s brother, Lewis, died suddenly from a heart attack at the age of 27 due to a heart defect, which Maureen also possesses. She might live to see 90, but she doubts it and focuses her attention on the afterlife.

Lewis, who was a medium, had a pact with Maureen; if he died first he would reach out and contact her. Now Maureen waits in Paris, the city where Lewis died, hoping a sign. Part of this search requires her to offer her services as a medium for potential buyers of haunted proprieties. Maureen spends the night in the house trying to make contact so she can determine if the spirit is benevolent or malicious. In the meantime, she paints; infatuated with the works of Swedish abstract pioneer Hilma af Klint, a spiritualist who used séances to influence her work.

But these three plot threads — Maureen as a personal shopper, Maureen the aspiring painter and Maureen as a ghost hunter — are merely window dressings for Maureen trying desperately to reconnect with her deceased brother; a goal that can sometimes blind Maureen to what’s obviously at hand. Yes, there are ghosts in Personal Shopper, but they don’t pose the same threat that the living does. When Maureen starts receiving texts from an unknown number, she foolish, and a bit hopefully, attributes them to her brother. The audience knows better and writer/director Olivier Assayas uses this knowledge to ratchet up the tension.

A ghost story in ten or so dissolves; Personal Shopper is an unbelievably unsettling and enjoyable piece of work. Assayas’s use of empty space and off-center framing of Maureen constantly puts us on edge. As do the enormous close-ups of Maureen’s phone as the texts come in, with each ding, wipe, vibration and typing sound effect drawing us further into Maureen’s anxiety. As Robert Bresson once put it, “The soundtrack invented silence.” And Assayas wisely drops extraneous music cues in favor of Foleys to heighten that silence. Phones, creaking floorboards, locking latches, even the almost silent swoosh of a hotel lobby door opening and closing amps up Maureen’s ghost story.

There is one notable exception to Personal Shopper‘s use of soundtrack, the one where Assayas summons the ghosts of cinema past and uses Marlene Dietrich singing “Das Hobellied” for a moment of suspense, release and unease. Like Bresson, Assayas toys with the audience, but not without giving them what they want.

This is the second time Assayas and Stewart have collaborated — 2014’s The Clouds of Sils Maria was also impressive — and rarely have artists ever felt more in sync. Stewart’s performance is understated, emotional, raw, real and outstanding. In one scene she manages to portray fear, loss, sadness and hope in a matter of seconds. The distance Assayas’s camera keeps in this scene is both respectful and probing. He’s teasing her, but only a little. She knows and is okay with it. This is dress-up after all, and Stewart is comfortable in just about anything Assayas can toss at her. A match made in heaven.

One thought on “PERSONAL SHOPPER”