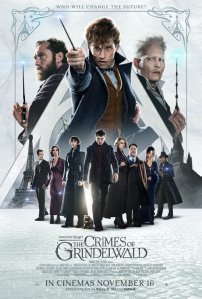 Like most franchise movies of the past decade, Fantastic Beasts: The Crimes of Grindelwald begins en media res. And like most franchise movies of the past decade, the filmmakers aren’t interested in catching you up on who’s who, what’s at stake, or even what’s going on. It’s up to you to come to the cinema like good little Hermione Grangers with every book, movie, and Pottermore article fully digested and ready to be regurgitated at the drop of a hat. Not that it’s going to make Grindelwald any less boring, but at least you will know who is talking to whom and what in the world they are talking about.

It isn’t at all surprising that Warner Bros. continues to churn out Potter movies — or Wizarding World as WB calls the franchise — considering the worldwide phenomenon the books launched and the profitability of the nine films so far (more than $8.5 billion worldwide). What is surprising is the direction these past two movies have taken. 2016’s snoozer, Fantastic Beasts and Where to Find Them took the oft-mentioned Hogwarts textbook and filled in the adventures of Newt Scamander (Eddie Redmayne) in 1926 America — possibly to use leftover costumes and sets from Baz Luhrmann’s 2013 version of The Great Gatsby. Along for the ride: his well-meaning and portly sidekick, Jacob (Dan Fogler), the free-spirited Queenie (Alison Sudol), and Tina (Katherine Waterston), Queenie’s older sister, an Auror employed by the Magical Congress of the United States of America, and Scamander’s love interest.

All four are back for Fantastic Beasts: The Crimes of Grindelwald, but as this installment progresses, the four find themselves intruding on their own movie. With both Tina and Queenie sidelined for long sections of the film, and Jacob popping in and out of the plot, Grindelwald centers more on Leta Lestrange (Zoë Kravitz), who is seeking atonement for a past transgression; Grindelwald (Johnny Depp), who is aiming to enslave the Muggles; and Albus Dumbledore (Jude Law), who remains trapped in Hogwarts both in present and past tenses. This might explain the narrative need for Scamander as a central figure — he was a favorite pupil of Dumbledore at Hogwarts and remains a close ally. Or, for a thematic theme: Scamander exists in these movies to illustrate the need to choose a side when the fate of the world is at hand — a tortured side story between Scamander and his brother, Theseus (Callum Turner), is flimsy in an already weak movie. Or he is there for no other reason than to receive this line: “Mr. Scamander, is there no monster that you couldn’t love?”

If there is any Rowling in Grindelwald, this line might be it; a simple plea for decency, humanity, and understanding in a very complicated world. Sadly, the sentiment is lost amidst the din of roaring beast, wizarding battles, convoluted lineages, weak allusions to historical events, and wooden acting. Redmayne does little more than stand in three-quarters profile for the entire movie and Waterston, a solid actress in other films, is downright dreadful. Granted, they are tasked with the unenviable proposition of standing next to green screens and reacting to nothing, but Waterston’s scenes with Redmayne — which uses a ridiculous screwball comedy trope to drive a wedge between them — feels as if Redmayne was also one of those green screen manifestations.

Grindelwald, like the previous installment, is penned by J.K. Rowling — with David Yates returning for another round of lackluster direction. You might expect that the author of seven of the most beloved and re-read novels of our time could come up with something a little more engaging, but alas it was not to be. Instead, Grindelwald is deadly dull and convoluted. And when a last-minute talisman is revealed, there’s a sense that Rowling’s tightly knit and expertly told saga might be drifting into George Lucas territory. Doesn’t exactly bode well for future installments.